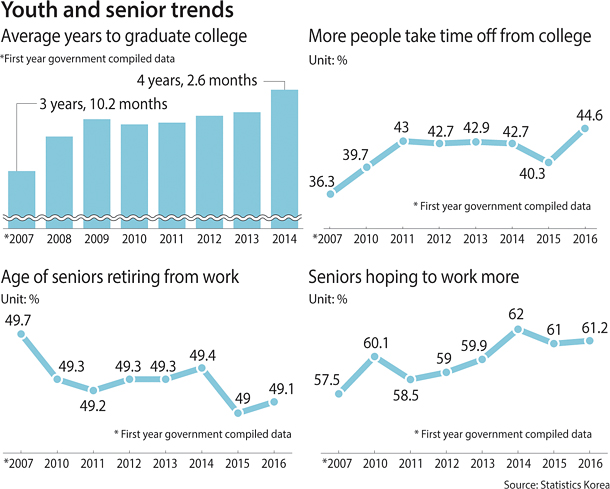 Korean college students are taking longer to graduate, about one month more on average than the previous year, as more take time off from school to seek internships and study for proficiency exams, according to a report from Statistics Korea.

The study released Thursday analyzed the economic activity of youth aged 15 to 29 and senior citizens aged 55 to 77. The results found that young Koreans took an average 4 years and 2.6 months to graduate college, up 1.1 months from a year ago and an all-time high since 2007, when the government first began compiling the data.

Koreans at four-year education institutions took an average 5 years and 1.4 months to graduate, a one-month rise compared to the previous year.

Statistics Korea said it does not have specific reasons for the increased figures, but one explanation may be that more Korean college students are postponing graduation because they believe submitting their resumes with a status of “degree candidate” is more advantageous than introducing themselves as “unemployed.”

More Korean students are also taking time off from college to boost their resumes by taking exams such as language proficiency tests and doing internships.

“The major reason for men leaving school temporarily was to fulfill their mandatory military service, while women did so in order to prepare for getting jobs,” said Shim Won-bo, a director at the statistics agency.

In fact, 96.8 percent of men said they took time off in order to serve in the military, while most women said they were building up their resumes.

According to the data, Korean youths took an average 11.2 months after graduation to find a job, 0.2 months more compared to the previous year. Those landing jobs within three months after graduation dropped 0.4 percentage points to 51.1 percent of the total, while the figure for those who took more than three years rose 0.2 percentage points to 8.7 percent.

Thirty-two percent said their first job was related to services and sales, while 25.1 percent said it was in management.

Young Koreans worked 1 year and 6.7 months on average at their first job, up 0.3 months from a year ago. Some 49 percent of those who quit their first job cited poor working conditions as the main reason for leaving. This figure was up 1.2 percentage points from last year. Around 13.5 percent cited personal reasons such as health and marriage for leaving their first job, followed by 10.7 percent citing end of contract.

Meanwhile, among Korean senior citizens aged 55 to 79, the average amount of years spent working hit an all-time high of 14 years and 11.1 months, up 1.7 months compared to the previous year.

The average retirement age was 49.1 years, and 30.6 percent of those who retired said they did so because their workplaces closed down.