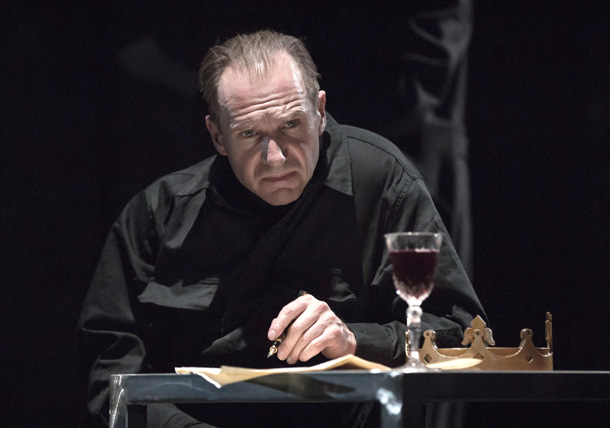 World events give a powerful resonance to Ralph Fiennes’ performance as Richard III the ruthless ruler, determined to eliminate all rivals, in a Rupert Goold directed production of the play at London’s Almeida Theatre. [AP/NEWSIS]

LONDON - Now is the summer of our discontent.

In many parts of the world, this is a season of violence, uncertainty and political turbulence. It’s a time when real life seems to echo “Richard III,’’ William Shakespeare’s chilling drama of political ambition, civil war and the human cost of power.

World events give a powerful resonance to Ralph Fiennes’ performance as the ruthless ruler, determined to eliminate all rivals, in a Rupert Goold-directed production of the play at London’s Almeida Theatre . Viewers can see it in movie theaters around the world starting with a live broadcast Thursday in Britain and several other countries.

When Fiennes speaks the famous opening line _ “Now is the winter of our discontent’’ _ some in the show’s London audience have found themselves nodding in recognition. Only the season seems wrong.

“The line that popped [out] last night was when I say ... `What, think you we are Turks or infidels?’’’ said Fiennes, on a sweltering summer day when news bulletins were reporting the attempted coup in Turkey.

He says the play explores the nature of authority, and contrasts people “who are looking for a right, ethical, balanced, authoritative figure and people who want to abuse power.’’

“I think a version of the same power play is happening all over the world, all the time,’’ Fiennes said. “It’s constantly out there, whether it’s in America now or possibly in Russia or Hungary or Turkey.’’

Fiennes is no stranger to evil. He played a Nazi concentration camp commander in “Schindler’s List,’’ and a generation of moviegoers knows him as villainous Lord Voldemort, nemesis of boy wizard Harry Potter.

Though he has recently been flexing his comic muscles in films including Wes Anderson’s “The Grand Budapest Hotel’’ and the Coen brothers’ “Hail, Caesar,’’ Fiennes relishes exploring humanity’s dark side.

“You can’t really play evil as a concept,’’ Fiennes said. “You can play specific intention.’’

With the hunchbacked Richard, “you can find a way into the anger and the way in which he despises the world.’’

“You can try to understand the psychology of someone who has been deformed since birth, has been despised or looked at askance because of his deformity.’’

He sums up Richard’s philosophy as: “`I am going to (mess) you all up because of the way I am. I have no moral sense or compass at all except that I want to destroy and get the maximum possible power for myself.’

“(There’s) a weird sort of release in someone who can go, `I am doing this and I am not going to be stopped.’’’

The role is physically demanding _ Fiennes has to contort to embody the character’s deformity, and build to a taxing battle scene as the armor-clad king meets his fate at the battle of Bosworth Field.

“I’m definitely feeling the impact of it,’’ said the 53-year-old actor. “The theater has been very good at providing me mini-massages, especially on two-show days.’’

Despite its rigors, actors covet the part of Richard. Kevin Spacey played the king onstage in 2011, and it’s hard not to see his ruthless Washington politician Frank Underwood in “House of Cards’’ as a 21st century Richard III.

One reason performers love the role is the relationship it offers with the audience. Shakespeare has his antihero address the audience directly, confiding his private thoughts and deeds _ a technique copied by “House of Cards.’’

“That’s one of the great pleasures of the part, that you are endlessly tickling the audience to be complicit with you in the horror,’’ Fiennes said. “It has a sort of theatrical eroticism on both sides.’’

Fiennes’ future projects are likely to include a return as spymaster M in the James Bond movie series. The next instalment will have a new director with the departure of Sam Mendes, and Daniel Craig is also rumored to be giving up the role 007 after four films.

With discretion worthy of MI6, Fiennes insists he has no idea who the next Bond will be.

“Daniel Craig hasn’t officially bowed out,’’ is all he’ll say. “I think he set the bar very high with his very persuasive physical, rigorous intensity.’’

And we won’t see Fiennes’ M leaping into the role of a front-line agent.

“I like being behind the desk,’’ he said. AP