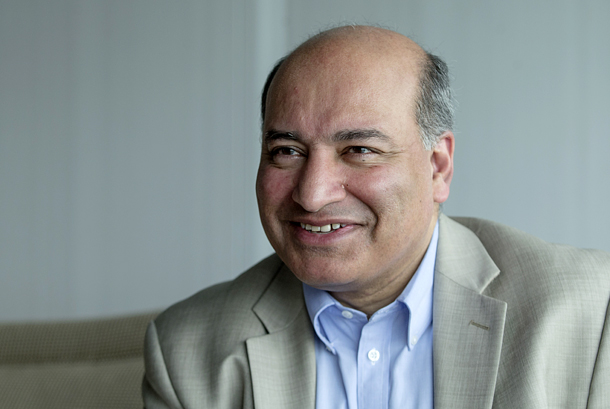 Suma Chakrabarti, president of the European Bank for Reconstruction and Development [KIM SEONG-RYONG]

Suma Chakrabarti, president of the European Bank for Reconstruction and Development (EBRD), said Britain’s vote to leave the European Union won’t have an immediate impact on the global economy.

In an interview with the JoongAng Ilbo and Korea JoongAng Daily last week, Chakrabarti said, “Firstly, it’s going to take some time.

“The U.K. hasn’t yet exited. The new prime minister in the U.K. will have to decide when to start the process,” the Indian-born president said. “In terms of financial and economic impact on EBRD, there isn’t any worry, because we are not an EU institution, so we are not directly affected by this.

“We are monitoring developments of the event, seeing volatility in exchange rates, but so far we are really unaffected. We will continue working closely with the European Union, an important shareholder for us,” he added.

The EBRD is an international financial institution created in 1991 to contribute to a new, post-Cold War era in Central and Eastern Europe. Its headquarters are based in London.

It has expanded its remit and invests in 36 countries spanning three continents - from Mongolia in Central Asia to Morocco on the Atlantic Ocean, from Estonia on the Baltic to Egypt on the Mediterranean.

The EBRD is owned by 65 countries from five continents with the United States as the largest shareholder. Korea holds a 1 percent stake in the institution.

Chakrabarti chose Korea as the first member country to visit after he began his second term this month. Since becoming EBRD president in 2012, Chakrabarti visited Korea three times.

Chakrabarti has extensive experience in international development economics and policy-making, as well as designing and implementing wider public service reform. Before arriving at the EBRD, he held the position of Permanent Secretary at the British Ministry of Justice and was its most senior civil servant.

“We have two levels of cooperation with Korea,” he said. “Korea is one of the most successful, rapid stories of development. One part of cooperation is that we need to showcase Korea’s development story to our countries of operation.”

During his visit, the EBRD and Korea’s Ministry of Strategy and Finance signed a memorandum of understanding on knowledge sharing under which Korea will share its know-how on growth and development with the 36 countries with EBRD investments.

The EBRD has made investments with Korean companies worth more than 1.5 billion euros ($1.65 billion), with a particular focus on Turkey, Hungary, Romania and Kazakhstan, according to the institution.

The financing has been primarily in the energy, telecoms, infrastructure and financial institutions sectors.

In Turkey, construction of the Eurasia Tunnel that is slated for competition early next year has been co-financed by Korean businesses including SK E&C and the bank.

“Korea has also been a strong donor to the bank, contributing some 25 million euros to support EBRD projects, mainly in Central Asia,” the president said. “One day we all hope that North Korea reunifies [with the South] and adopts democracy and a market economy, and we can help the process since we have a lot of experience on that.”

“EBRD worked with many Korean companies in our countries of operation, we have joint investments worth 1.5 billion euros with Korean companies,” he said. “That’s good but it’s not good enough. I want to increase it.”

“Part of my visit here is to increase that interest of Korean companies in EBRD cooperation,” the president said. “This time we are targeting mid-sized Korean companies.”

Chakrabarti held a seminar with members of the Association of High Potential Enterprises of Korea, a business association representing mid-sized firms, to discuss cooperation measures on last Tuesday.

“One area where Korea really stands out is sustainable energy,” he said.

“Korean companies have developed a lot of technology for that area. Since the bank is going to increase investments in energy projects from the current 25 percent to 40 percent by 2020, that’s where we can work with Korean companies.”

Investments in infrastructure are crucial for the global economy to emerge from a prolonged slowdown, the president underscored.

“There are huge infrastructure gaps in those countries we invest in, and I think they offer Korean companies a lot of opportunities and good profits,” he said.