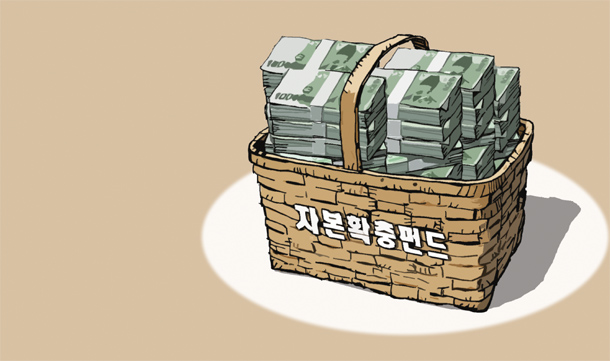 In 2009, a recapitalization fund was prepared to assist commercial banks faced with a liquidity crunch amid the financial crisis. The government and the Bank of Korea set aside a total of 20 trillion won ($17.6 billion), but only about 3.96 trillion won was actually used. While commercial banks were struggling, they didn’t use the fund because its annual interest rate was higher than the market rate of 6 to 7 percent.

Recently, the government and the Bank of Korea set up a similar 11 trillion-won fund to prepare for the growing insolvency of government-run banks over the course of corporate restructuring. But there are concerns this fund could prove useless once again.

Bank of Korea Gov. Lee Ju-yeol said, “The interest rate on loans from this fund should be higher than the market to guard against moral hazard.” Members of the Monetary Policy Committee agreed that the actual issuance of loans should be strictly reviewed.

But the dilemma is that the fund would become “useless” if it excessively adheres to these principals. The fund is made possible by the purchase of contingent convertible bonds issued by state-run banks. The market predicts that the annual interest rate will be around 2.5 percent. But industrial financial debentures and contingent convertible bonds, which the Korea Development Bank and the Export-Import Bank of Korea use to raise funds, are at 2.1 to 2.2 percent. When the state-run banks can raise funds at a cheaper rate in the market, there is no reason for them to pay higher interest rates to use the recapitalization fund.

Experts say the fund will be useless and that the government and BOK brought it upon themselves. The fund is an emergency measure. It is more of a safety net to prevent an extensive credit crunch when the insolvency in the shipbuilding and marine transport industries spread to the financial sector. It should have been designed more carefully and thoroughly. But the government and the BOK rushed. In the meantime, the fight between the two parties was highlighted. The government was criticized for taking an expedient measure by using a note asserting its authority in order to avoid going through the National Assembly. Controversy unrelated to the essence of restructuring grew. The government failed to illustrate the big picture of how the restructuring of troubled industries ought to happen.

But now that the fund has been launched, the government and BOK need to figure out how it can be used to actually help with restructuring. The BOK is understandably agonized. If the interest rate is too low, it could indeed be criticized for giving favors. The priority is to define specific rules for the loan issuance and transparently inform the market.


*The author is a business news reporter of the Joongang Ilbo.