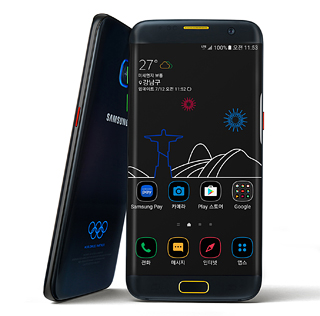 Samsung Electronics released an ambitious special edition of the Galaxy S7 Edge smartphone to celebrate the upcoming Rio 2016 Olympics. But the limited edition failed to connect with collectors the way a Batman smartphone did in June.

In order to celebrate the Summer Olympics starting on Aug. 5, Samsung, an official sponsor of the games, made 2,016 phones available in Korea, Brazil, the United States and Germany. Orders began Monday.

But Samsung’s online store for Korea shows the phone was still available from all three telecom operators on Thursday, the day sales closed.

The edition was also available from the online store of Best Buy, the exclusive retailer for the second special edition of the popular S7 Edge in the United States on Thursday. The phone, which comes with 32 gigabytes of storage, carried a price tag of 1,067,000 won ($939) in Korea and $850 in the United States, compared to the regular S7 Edge’s $769 in the U.S.

The metal sides of the Rio phone are black and glossy and each hardware button has been customized to correspond with Olympics rings. The home button and earpiece are yellow; the power button is red; the volume button is green; and a blue bezel encircles the camera. The colors of the Olympic Rings are also featured in the user interface in both the home and lock screens as well as in the notification bar and the messages, dialing and contact screens.

The Batman-themed version of the Galaxy S7 Edge, dubbed Injustice Edition, was a huge success despite a price tag of 1,199,000 won. Samsung said the limited edition of 1,000 units sold out just 10 minutes after preorders kicked off in Korea on June 13.

The special edition “Batphone” was produced in partnership with Warner Bros. Interactive Entertainment and DC Entertainment to commemorate the third anniversary of the “Injustice: Gods Among Us” mobile game. The phone came with a number of a gold-colored Batman logos painted on the back. The home button and camera sensor are adorned with gold trim.

The low popularity of the Olympics edition may be a lack of “rarity” appeal, important for limited edition products. Samsung has come up with limited editions for each winter and summer Olympics - including London in 2012 and Sochi in 2014 - and given them as gifts to everyone participating in the games. That translates into thousands of units.

Some point to the mediocre aesthetics of the Rio phone.

“The efforts to materialize all of the five colors representing the Olympics flag are appreciated but the combination with the elegant and refined black body makes it a little funky,” Pcpinside, a noted tech blogger, wrote.

Some smartphone fans are also awaiting the Galaxy Note 7, slated to debut on Aug. 2.