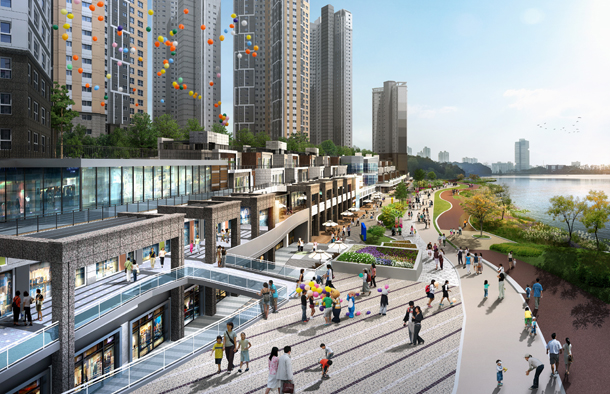 Encouraged by the current low interest rates, property investors have been showing keen interest in the shopping arcade at Hyundai Engineering's Hillstate Gwanggyo.

The total size of the arcade is 13,280 square meters, consisting of two floors and 77 rooms.

Hilstate Gwanggyo also includes apartment buildings that can accommodate 928 households and officetel buildings with 127 rooms, in addition to the arcade.

All apartments and officetels have already sold out, but the arcade is currently for sale.

The investment value of Hillstate Gwanggyo has already been proven through the fierce competition for the housing. An average 20 people applied for each apartment, while 422 applied for each officetel.

The most appealing aspect of Hillstate Gwanggyo’s arcade is its location near Gwanggyo Lake Park. The park was reforested when Gwanggyo was introduced as a new city, and the eco-friendly grounds received the Korea Landscape Award in 2014. The necessity of commercial facilities near the area has increased as the park is attracting more and more visitors with its 6.5-kilometer-long walkway along which families can camp overnight.

Since lake parks around Korea consistently attract many visitors throughout each year, monthly rent for facilities located near them are generally expensive compared to other locations.

According to Jumpo Line, an information provider for commercial real estate, the average monthly rent for stores in Janghang-dong, where Ilsan Lake Park is located, was 159,500 won ($139.6) per 3.3 square meters (35.5 square feet) this year. This is twice the rent of stores located in the neighboring Daehwa-dong (82,300 won) or Madu-dong (72,200 won)

As the Gwanggyo Lake Park area has many favorable factors for development, more investors have been showing interest in the area. The construction of new buildings along Gwanggyo’s D3 Block, where the Hillstate Gwanggyo is located, is set to conclude soon, including the government office for Gyeonggi Province, as well as the the Suwon Convention Center on the west side and Gwanggyo Beopjo Town on the northeast side.

The positive effect on the area’s economy is anticipated to be massive when the construction of the government office and Gwanggyo Beopjo Town is completed.

Gyeonggi Province has a large population, so the government office will also be much bigger than any other in Korea’s provinces. Gwanggyo Beopjo Town is expected to become a busy business district constantly crowded with residents and their clients. Due to its environment, the Gwanggyo Lake Park area foresees heavy foot traffic all week as a commercial complex, and competition for space there is fierce.

Hillstate Gwanggyo’s shopping arcade is easily accessible by public transportation or car. After the Shin Bundang Line was extended last January, it became possible to go from Gangnam to Gwanggyo in approximately 30 minutes. Gwanggyo used to be heavily dependent on the Red Buses that travel between Seoul and Gyeonggi, but it’s now more accessible than ever.

Access by car is also convenient because Beopjo-ro, which leads to the high-income area of Suji-gu, Yongin, passes right in front of Hillstate Gwanggyo’s shopping arcade. The Gwanggyo-Sanghyeon Interchange is also close by. When the Yongin-Seoul Expressway and the Gyeongbu (Seoul-Busan) Expressway are connected in 2018, traveling between Gangnam and Gwanggyo by car will get even easier.

"Hillstate Gwanggyo features a premium-class shopping arcade where it is possible to view the lake area without crossing any traffic way," said a person affiliated with the project.

"After construction is completed, the facility will become one of few secure places to invest in, as it has both high commercial value and a favorable geographical condition. The Hillstate brand itself has high preferences among consumers as well."