Oh no, Scrat! In the fifth installment of the “Ice Age” saga, the squirrel is still preoccupied with his beloved acorn. But this time, he accidently sets off a series of cosmic events that threaten the whole planet. During his pursuit of the elusive item, he finds a UFO that has been frozen inside a glacier. The precious nut gets wedged into a control lever that operates the flying ship, and Scrat gets catapulted off earth, where he sets off a chain reaction. In space, he not only knocks apart planets, but also causes meteorites both little and huge to fall to earth - including one that threatens to destroy the blue planet.

Meanwhile, the old crew of sloth Sid, saber-tooth Diego, and mammoth Manni has expanded to include mammoths Ellie and Peaches. The group is forced has to leave their home and embark on a quest full of thrills and adventure to prevent a catastrophe from happening. On their trip to save the world they meet friends both old and new while traveling to exotic new lands. They also make an astonishing discovery at a meteorite’s crash site. 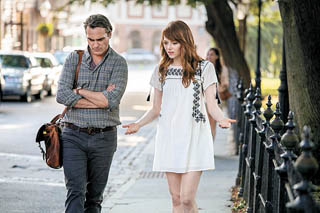 Abe Lucas (Joaquin Phoenix) was once an aide in conflict areas, but is now a disillusioned philosophy professor starting a new job. He is still plagued by doubts, wondering if he is doing the right thing, and keeps thinking about his almost legendary affairs. Aware of his inability to change the world, he has been living in a state of deep nihilism and arrogant desperation.

Lucas’ reputation had already reached his small campus near Newport, Rhode Island, before he even arrived. He is said to be a womanizer and an alcoholic. It doesn’t take long until Prof. Rita Richards (Parker Posey), who is growing lonely in her marriage, makes advances on Lucas. He quickly gains another admirer, the intelligent and pretty student Jill (Emma Stone), whom he can’t help but feel attracted to. He enters into a relationship with her which remains platonic, even if Jill wants more. But as far as sex is concerned, he is just a shadow of himself now. His problem seems to be solved when he starts planning a very special crime. A “just” homicide - to help a woman who is unlawfully being held captive - will help to unlock Lucas both creatively and sexually.

This dark comedy, which premiered at the 86th Cannes Film Festival in 2015, is Woody Allen’s 46th film. He is back with his usual formula, even though this new project is slightly edgier compared to his previous movie, the rather tame “Magic In The Moonlight.” It also marks Allen’s fourth film that borrows themes from Dostoyevsky’s famous 19th century novel “Crime and Punishment,” after “Crimes and Misdemeanors” (1989), “Match Point” (2005) and “Cassandra’s Dream” (2007).

This movie is partially a modern-day retelling of the novel itself, in which a university student, deeply troubled that he can’t change the world, decides to murder a pawnbroker. The move is intended to prove his moral superiority, and he tells himself that ridding the world of a vile person would make it a better place.

Despite being a familiar Allen movie, it genuinely shows how its characters developed their views on the world and the randomness of fate. It will leave audiences wondering, “Can he really get away with this?” 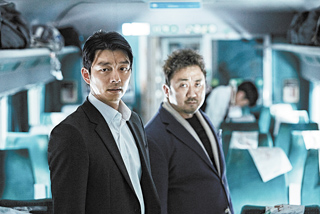 An unknown virus spreads nationwide and the survivors must get to Busan, the only safe place left in Korea.

Seok-wu (Gong Yoo) and his daughter take the KTX bullet train heading to Busan. A person infected by the virus also gets on the train and turns everything into chaos.

People infected by the virus transform into zombies, and in the limited spaces like the train and stations, the survivors struggle to stay away. The speed and claustrophobia of the KTX combine to create a thrilling effect.

The film marks director Yeon Sang-ho’s live action debut. He has previously made animated movies like “The King of Pigs” (2011) and “The Fake” (2013).

The film was also invited to the Cannes Film Festival, which is rare for a big-budget Korean movie. “Train to Busan” was the first to be screened there in eight years, since “The Host” (2006) by Bong Joon-ho and “The Good, The Bad, and The Weird” (2008) by Kim Jee-woon.

The film’s prequel, “Seoul Station,” will be released later in August to show how the whole situation really began. The prequel is an animated feature also directed by Yeon. 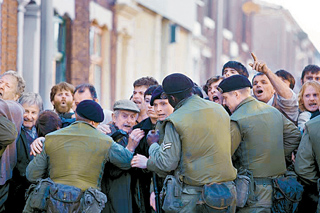 Set in Belfast in the early years of “The Troubles,” the film takes place as the situation is escalating into a violent civil war. It follows Gary Hook (Jack O’Connell), a young, inexperienced British soldier who is deployed to Belfast as part of a new regiment to help control an emergency situation caused by Provisional Irish Republican Army (IRA) terrorism.

On his first patrol, the unit is tasked with assisting the civilian police in their duties. Hook’s regiment, under the command of Lieutenant Armitage (Sam Reid), is quickly bombarded with packages of urine and feces. A house-to-house search goes horribly wrong and the resulting confrontation triggers a violent and dramatic riot by local groups.

Soon, Hook is separated from his unit and alone on the streets of Belfast. He is forced to overcome the dangers that include paramilitary groups and radical street gangs who all want to enforce their own interests.

Unable to tell who is friend and who is foe, and armed with nothing but a knife, the young private has to make his way back to his military camp in a foreign and hostile territory where he experiences a night full of fear, suspense and despair.

The origins of the problem stretch back to 1167, when England first laid roots in the area. Despite some intermingling of the English and Irish population, the two were never completely united. As a result, two different populations with differing interests found themselves living on a small island side by side. At the heart of the conflict lay the constitutional status of Northern Ireland. The goal of the unionist and overwhelmingly Protestant majority was to remain part of the United Kingdom. The goal of the nationalist, republican and almost exclusively Catholic minority was to become part of the Republic of Ireland. More than 3,500 people were killed in the conflict, making it one of the most bloody and violent guerrilla wars in history. The conflict began in the late 1960’s and is usually considered to have ended with the “Good Friday” agreement in 1998.

This thriller will have viewers on the edge of their seats with action packed scenes and an outstanding recreation of the west Belfast war zone.