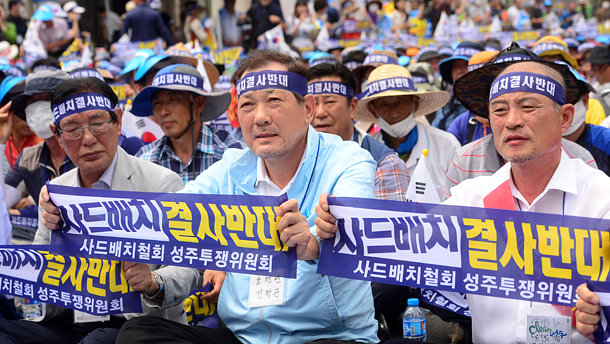 President Park Geun-hye challenged critics of the deployment of the U.S.-led Terminal High Altitude Area Defense (Thaad) system to Korea on Thursday, asking them to come up with a “better alternative” to guard against missile attacks from Pyongyang.

“Amid continued pressure and attacks from North Korea, some political circles are calling for the cancelation of the deployment of the Thaad,” said Park while presiding over a meeting of the National Security Council. “But if there is a better alternative to protect our people from North Korea’s missile attacks, please do suggest it.”

Park defended her administration’s decision, which came after discussion with Washington officially launched in February following Pyongyang’s fourth nuclear test and a long-range missile launch. “The government decided to deploy Thaad because it determined it was the best method to protect our people and country from North Korea’s threats,” she said.

“Becoming divided and the nation falling into chaos because of a decision that cannot be helped in order to protect the lives of our people and our country,” she warned, plays into the hands of Pyongyang. 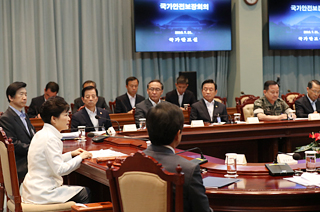 President Park Geun-hye presides over a National Security Council meeting at the Blue House on Thursday, in which she challenged critics of the Thaad deployment. [NEWSIS]

On July 8, Seoul and Washington jointly announced the deployment of the Thaad advanced missile defense system to Korea, a move vehemently opposed by China and Russia. On July 13, Seoul and Washington selected Seongju County in North Gyeongsang, with a relatively small population of 45,000, as the site where the battery will be installed by the end of next year.

This decision prompted raucous protests from Seongju residents. When Prime Minister Hwang Kyo-ahn visited the area to explain and apologize last Friday, he was pelted with eggs and doused with water. Hwang, National Defense Minister Han Min-koo and other officials were trapped in a bus for nearly seven hours as the protest raged.

Pyongyang also fired three ballistic missiles, including two short-range Scuds and an intermediate-range Rodong, toward its eastern waters on Tuesday as a reaction to the deployment of the Thaad system. On Wednesday it announced those launches were simulations of an attack on the site where the battery will be placed.

The key concerns among Seongju residents are potential health and environmental risks from the electromagnetic radiation emitted by the powerful Army Navy/Transportable Radar Surveillance, or AN/TPY-2. The government has denied there are any safety risks.

The first rally in the capital led by Seongju residents was attended by some 2,000 people Thursday, who traveled 168 miles by bus to protest at Seoul Station Plaza in central Seoul. Fifty express buses were deployed for the ride, which took four and a half hours.

Some 4,000 police officers were mobilized, forming police lines around the area to assure that the rally didn’t stray from the permitted zone.

For three hours from 2 p.m., floods of protestors yelled raucous chants in unison under a scorching sun, calling the defense missile system at one point a “monster” in English. Temperatures exceeded 30 degrees Celsius (86 degrees Fahrenheit).

Flyers promoting an anti-Thaad petition were handed out to passersby, as a civic committee based in Seongju pleaded with the public to help them collect 100,000 signatures by mid-September.

An online petition on the U.S. White House’s website called “Rescind the decision to deploy Thaad antimissile system in South Korea,” has garnered over 9,500 signatures since last Friday.

In contrast to local media reports earlier in the day that an umbrella group of 80 different right-wing activist organizations would counter-demonstrate nearby, placing police on high alert for a possible clash, no serious conflicts took place.

Some 20 members of a conservative group called Truth Korea Party held a pro-Thaad demonstration about 100 meters away, but managed to end peacefully.