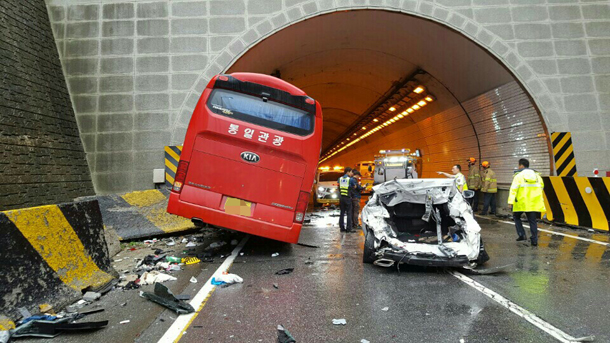 A tour bus ran into five vehicles, killing four and injuring 41 people, at the entrance of Bongpyeong Tunnel on Yeongdong Expressway on Sunday. [NEWSIS]

It has become something of a mantra among drivers in Korea to avoid big buses and trucks on highways at all costs.

“Big vehicles like buses and trucks are a ticking bomb on the road,” says Ms. Yoon, a 33-year-old office worker who often drives to work. “Change lanes, pass them, do what you can to avoid driving near them.”

Yoon’s description is not an overstatement for many drivers who fear getting into accidents with trucks and buses, like the one on Yeongdong Expressway on Sunday, caused by a bus that crashed into five vehicles and injured 41 people, killing four.

In 2013, a similar accident caused by an airport shuttle bus near Sapaesan Tunnel in Gyeonggi killed a couple sitting in a Sonata. The bus driver rammed into the Sonata before hitting seven more cars. The bus, the Sonata and six more cars instantly burst into flames.

“I was driving with my wife and kid on a highway during our vacation,” he said, “and we were going at like 100 kilometers per hour [62 miles per hour] when a truck sped up behind me and was literally bumper to bumper with my car, threatening me to drive faster.”

After the Yeongdong Expressway accident, netizens called for measures to restrict buses and trucks from driving outside bus-only lanes.

While some truck and bus drivers may call such fear and discrimination ungrounded, the Road Traffic Authority said that last year the mortality rate from traffic accidents involving large vehicles was more than twice the rate of those involving smaller four-wheel vehicles.

In Seosan, South Chungcheong, last October, a 25-ton concrete mixer truck ignored a stop signal to make a right turn, trying to avoid a motorcycle, and skidded and flipped to its side, flattening a nearby Chevrolet Cruze. Three women inside the Cruze died instantly. In another accident on the Seoul-Chuncheon Highway last September, a 23-ton truck hit a taxi, killing the driver and injuring four people.

Experts point to foreign examples of traffic rules for improvement on the Korean system.

In Germany, bus and cargo truck drivers are not allowed to drive for more than nine hours. They are required to take a 45-minute break for every 4.5 hours of driving time.

“In Korea, trucks and buses are limited to 110 kilometers per hour on the highways,” said Im Jae-kyung, a researcher at the Korea Transport Institute. “But other than that, and the restriction on the hours they are allowed to drive on highways, trucks and buses face no other road-related restrictions or rules.”

He added, “Strict rules like those in the United States, whereby bus and truck drivers are not allowed to drive for more than 11 hours at a time, should be established and implemented here and any transportation company whose drivers do not comply to such regulations should be suspended from all operations.”