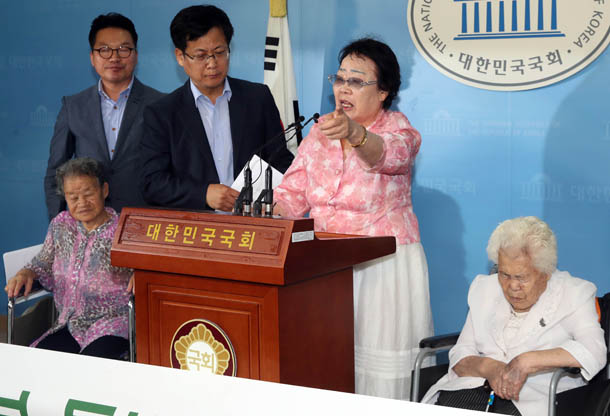 Three surviving members of Japanese wartime sexual slavery - Lee Yong-soo, Park Ok-seon and Yi Ok-seon - petition for the enactment of a special law for so-called comfort women in a press conference in the National Assembly on Thursday. [KANG JEONG-HYUN]

Three survivors of the Japanese government’s wartime sexual enslavement held a press conference in the National Assembly on Thursday, where they requested the Park Geun-hye administration legislate a special law to support the so-called comfort women and criticized the president for failing to fulfill her duty as the “mother of the nation.”

The bill additionally requires the government to demand a genuine apology from the Japanese government, fund research and studies to investigate sexual enslavement during World War II and designate a memorial day for the comfort women.

The three surviving comfort women, Lee Yong-soo, Yi Ok-seon and Park Ok-seon also requested the government actualize the formation of a special economic zone between South and North Korea. Choi Sung, the mayor of Goyang, Gyeonggi, and Yoo Eun-hae, an elected official from the Minjoo Party, also took part in the conference.

“If you’re elected as a president,” said Lee, swearing, “you should know to love your people and know your nation’s history. But Park Geun-hye does whatever she wants. She’s all bullshit.”

She continued, “I’ve been standing in front of the Japanese Embassy for 25 years while shouting that it officially apologize to us and offers legal compensations. Some millions of people made sacrifices to build this country and no president dared to talk about the comfort women except Park.”

During the conference the comfort women also pleaded with the government to acknowledge that the Japanese government is “justifying its war crime” and “distorting history,” which only adds to their pain. They also demanded that Japanese Prime Minister Shinzo Abe make a genuine official apology and come up with a measure to prevent such “atrocities.”

“What right does President Park have to negotiate on behalf of us, are we related by blood? Why is she insisting to live our lives for us? She should reverse it again,” she said, referring to the 2015 comfort women deal struck between Korea and Japan.

The other people in the conference tried to stop Lee from speaking further, but she kept going.

“I have things to say about Thaad, as well,” she continued, referring to the Terminal High Altitude Area Defense system. “I’m from Seongju [North Gyeongsang]. If there’s no problem, then you should install it in front of the Blue House. It’s the job of the nation’s mother to check if something is safe or not and then to have the people follow it.”