When will we wake up?

When will we wake up? 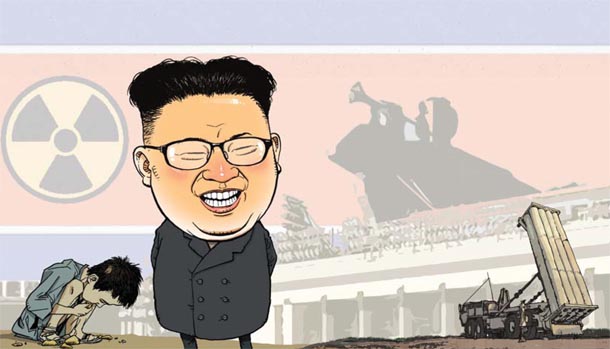 I had been to the Chinese border with North Korea early this month. It was a trip covering 1,750 kilometers (1,087 miles) along the Amnok (Yalu) River and Tumen River. It is an area the South Korean government advises against traveling on concerns of abduction by North Koreans. But I led a group of 23 youths and university students in a program sponsored by the JoongAng Ilbo to teach the young generation about unification.

For them, it was the cruel reality check that they were living in a bisected land. The 320-meter Tumen bridge that connects the Tumen City in Jilin Province of China and Onsong County in North Hamgyong Province in North Korea cannot be crossed. Some of the group members attempted to set their foot on the northern side when Chinese security guard had not been looking to feel what it was like to touch North Korean grounds.

The sight of Sakchu County across the Yalu River also hurt. The team had a peek into the actual tough lives of North Koreans on a boat in the downstream of the river. The cows on the field were bony. Kids worked on the mountain slopes that were cut to make room for crops. They stubbornly kept their heads down while the southerners waved and tried to get their attention. A female university student said her heart ached as if in one-sided love.

The borders were heavily protected with barbed wire and concrete fence. A local said North Korea erected special fence miles along the borderline to prevent people fleeing after their lives that became harsher under Kim Jong-un. Some of them are in high voltage.

The frontier city of Hyesan that lies on the upper stream of Yalu was even more pitiful. Our guide described the place as a living hell with confined starving residents. Students were appalled at the explanation that a North Korean security guard crossed the border to drag back a fleeing North Korean in wire rope.

“Imagine the terror the North Korean defectors would feel after being caught upon seeing that,” said Professor Kang Dong-won, head of the Hana Center at Busan-based Dong-A University who had accompanied the trip, pointing to a sign post that said North Korea was within three minute distance. The group fell into a silence. The brutal lives and deprivation of rights of North Koreans dominated talks as the group toured the Mt. Baedu and historical sites along the border.

The U.S. Republic Party in its party platform adopted on Monday labeled North Korea as “a slave state” of Kim family, denouncing the chronic human rights abuses by the regime. This should have been an upset for Pyongyang which touted the Republic Party on its “wise” choice to field “far-sighted” politician Donald Trump who offered to meet with North Korean leader and called for a pullout of American troops from South Korea as a presidential nominee.

Kim in his first year as a hereditary ruler in April 2012 promised his people to never let them go hungry again. But lives of the populace have become harsher as he obsessively pursued nuclear weapons development. The series of military provocations have reinforced isolation and international sanctions. The showpiece high-rise apartments in Pyongyang went to researchers of nuclear and weapons. The local economy became wrecked at the expense of nuclear and missile development.

North Korea this week fired medium-range Scud and Rodong ballistic missile types that flew more than 500 kilometers before falling into the sea of the east coast. The state media claimed that the launch overseen by Kim Jong-un was “simulated” test for preemptive strike at ports and airfields in the operational theater in South Korea. Through the launch, it claimed to have examined the operational features of the detonating nuclear warheads on ballistic rockets.

North Korea’s nuclear threat has become real. When it was suspected of clandestine development of nuclear material 23 years ago, Pyongyang vehemently denied of such activity. When it was confirmed, Pyongyang defended it as peaceful deterrence. Now it blatantly threatens of preemptive attack and turning the south into a “sea of nuclear fire.”

It built and sophisticated its nuclear weapons technology while the southern president condoned it to have justice in mid-2000s. Since then it implemented four nuclear tests and is advancing ballistic missiles capable of delivering the nuclear warheads.

South Korea remains incredibly unconcerned. The people are divided about deploying anti-missile system called Terminal High Altitude Area Defense (Thaad) that could build better defense against North Korean missile attacks. Environmental and human rights activists joined the protest against the deployment. The decision to bring the powerful system is in jeopardy due to prevalent rumors and rabbles.

Meanwhile, Kim in the north is marshaling his country for a war for unification with mad ambition of turning the entire land into a slave state.
JoongAng Ilbo, July 22, Page 32