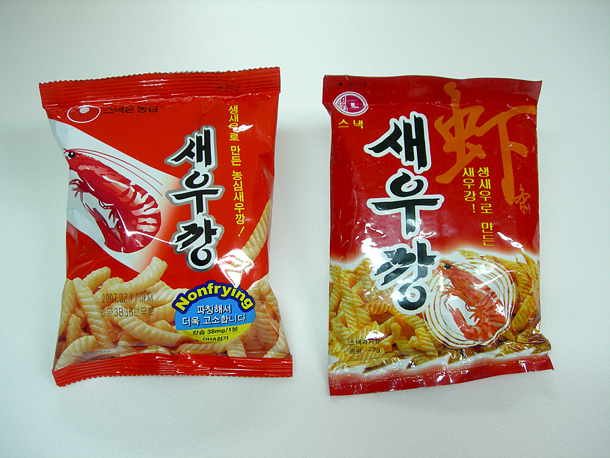 Korea’s leading snack manufacturer Nongshim raised the price of 15 types of its confectionary products by an average of 7.9 percent, including its flagship chips Saewookkang. The new price tag will go into effect today at every retail store.

Nongshim explained that their recent price markup comes from the rise in cost in multiple manufacturing steps including management of sales, human resources and logistics. The increased cost of raw materials also contributed to the recent price jump.

Other products including Onion Rings and honey-flavored Ggulggoabegi will be sold at 1,400 won, a 7.7 percent increase from its original 1,300 won.

Some of the bulk-sized products will have their price fixed, but will experience a decrease of content.

For example, Squid Chips, which used to weigh 168 grams (6 ounces) will shrink to 153 grams per package. Octopus-flavored chips, called Jagalchi, will also downsize from 183 grams per pack to 167 grams.

“We tried to minimize the price hike despite the pressure from several cost increases,” said a Nongshim spokesperson. “But we are maintaining the price for some of our products including our premium potato chips, Sumi Chips.”

This is the first time in 2 years and five months for the market leader Nongshim to increase the price of its products, joining other confectionary companies which have been raising their products’ price since early this year.

In March, Lotte Confectionary raised prices for its five biscuit-type products including Butter Coconut, which was raised from 1,200 won to 1,400 won.

The price of Guateau, a chocolate-flavored biscuit was raised to 3,600 won from 3,200 won.