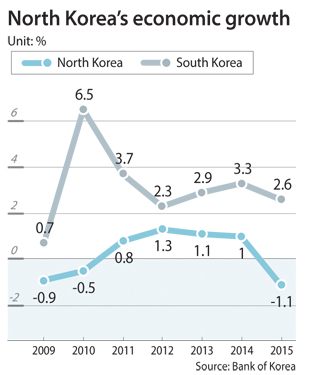 North Korea’s economy in 2015 retreated for the first time in five years and suffered the sharpest drop in eight years due to drought and falling commodity prices on the global market.

Last year, North Korea’s economy declined 1.1 percent from a year earlier, the Bank of Korea said on Friday. The last time North Korea saw its economy retreat was in 2010, when it dipped by 0.5 percent. Additionally, last year’s decline was the sharpest since 2007, when its economy fell 1.2 percent.

Other than the construction industry, the South Korean central bank said, other industries, from agriculture and fishing to mining and manufacturing, have all fallen.

The service industry contributes one-third of the nation’s economy but agriculture, fishing, manufacturing and mining industries, when combined, account for half of the contribution made in North Korea.

Mining and manufacturing account for 32.7 percent, of which manufacturing takes up 20.4 percent while agriculture and fishing contribute 21.6 percent.

The electricity, gas and water supply industry, however, tumbled the most, dropping 12.7 percent.

The BOK said in the agriculture and fishing industry, fishing and livestock businesses grew while grain production, particularly rice and corn, fell sharply. This is a sharp turn from the 1.2 percent increase reported the previous year.

The drought also affected the production of electricity by hydropower, widening the decline of the electricity, gas and water supply production from 2014’s 2.8 percent fall.

Mining production also fell as global commodity prices retreated, resulting in a reduction of iron ore and magnesite production. The 2.6 percent decline is also a drop from last year’s 1.6 percent increase. Natural resources are one of the biggest export products of North Korea.

Manufacturing is also turning around from last year with a 0.8 percent gain, especially as its heavy industries including metal products, machinery and transportation equipment shrunk 4.6 percent.