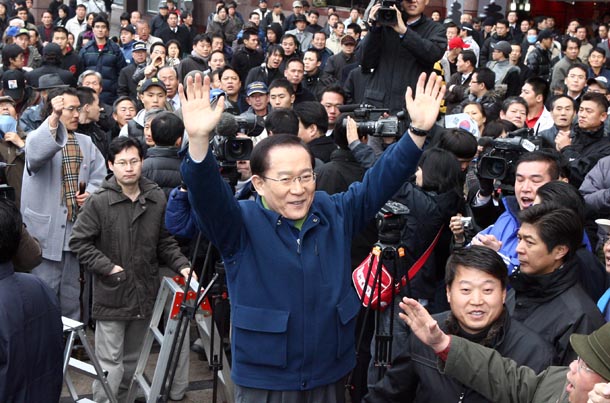 A Saenuri Party politician eyeing a presidential run had dinner with a fellow assemblyman at a restaurant in Yeouido, western Seoul, and he reportedly sang a trot song. He may have thought he was entertaining, but it only showed what a chaotic state the Saenuri Party is still in after its general election crush in April.

“There’s something special about the one who will become president,” I always thought before becoming a reporter. My belief didn’t change even when I became a political news reporter.

When I was a newbie covering the Millennium Democratic Party in 2002, I predicted Lee Hoi-chang would win against Roh Moo-hyun.
While opinion polls continued to show Roh in the lead, I still thought Lee would be the victor. After all, Lee was a veteran politician who lost to Kim Dae-jung in the 1997 presidential election by only 390,000 votes. He was in the same league as the so-called three Kims: Kim Dae-jung, Kim Young-sam and Kim Jong-pil.

It was like wagering on traditionally strong teams when betting on the World Cup. Lee seemed more special to me, but he was defeated by the seemingly ordinary Roh, and my prediction was proven wrong. Voters already knew that Roh, the “fool,” saw through the zeitgeist and was more special than Lee, who settled for loyal votes.

After five years of the liberal Roh administration, the presidency was handed over to conservatives. A former conglomerate employee, Lee Myung-bak, became a legend after being elected with a margin of 5.3 million votes, and the queen of elections, Park Geun-hye, won by showing off her stories about patriotism and principles. They were praised as the best cards that the conservatives could play.

It has been 30 years since the 1987 system based on a five-year single-term presidency and small electoral districts was implemented. In the three decades since, most presidents have not been able to avoid the cycle of glory and expectations followed by lack of communication, trial and error, national schisms and low approval ratings.

The masters of politics, the people’s president and the best conservatives are no exceptions. President Park Geun-hye has one year and seven months left in her term, but like most before her, she has gone down a similar track since taking the helm of the presidency.

The Minjoo Party’s chairman, Kim Chong-in, is a proponent of constitutional revision for a parliamentary system, and in an interview with the JoongAng Sunday on July 17, he said, “The presidential hopefuls think that they are given the constitutional authority to lead the administration for five years safely even if they are not competent.

But the prime minister in a parliamentary system won’t last if he or she is incompetent. So they want to keep the presidential system.”

Those with presidential ambitions for 2017 may not agree with Kim completely. But I ask, “Who can confidently say, ‘I am prepared. I can do differently.’?” Koreans are waiting for a “more special” superman to jump over the hurdle that their predecessors have failed to clear, and it is almost like winning a lottery.


*The author is the deputy political news editor of the JoongAng Ilbo.