‘I thought of helping others as my calling,’ says Yi

‘I thought of helping others as my calling,’ says Yi 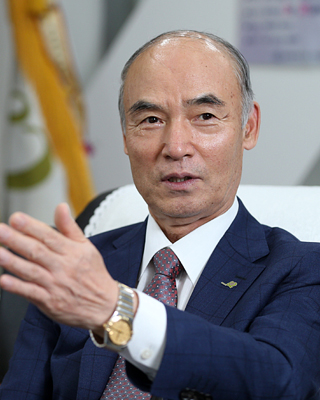 In the mid-1970s, an ordained minister founded a volunteer group in a slum in Seongnam, Gyeonggi, designed to help children and create a credit association for the residents to live independently. Almost five decades later, Yi Il-ha, 69, is the recently retired chairman of Good Neighbors.

“Strangely,” said Yi, “I was invigorated by helping others. I thought of it as my calling.”

However, as the scale of his work began to expand, so did his personal debt. Yi was ready to give up everything and fly to the United States with his family. But his son, a high school student at the time, told him, “Dad, I want you to continue to live a life devoted to helping others.”

Yi founded Good Neighbors in 1991, a nonprofit humanitarian organization dedicated to supporting global child education and community development. He worked for 25 years in Korea and abroad.

In 1996, his nonprofit organization became the first in Korea to earn the General Consultative Status from the United Nations.

This status allows an organization to participate in a committee composed of 11 UN Economic and Social Council (ECOSOC)-affiliated organizations. Last month, Chairman Yi stepped down and gave his position to the former secretary general of Good Neighbors, Yang Jin-ok, 44. On July 15, the JoongAng Ilbo interviewed Yi at the Good Neighbors headquarters in Yeongdeungpo District, western Seoul.

Q. Three years ago, you had a stroke. How are you now?

A. My staffers came to visit me while I was on the sickbed when they were faced with an important decision. I could not speak so they told me ‘Mr. Yi, smile if you agree with our decision.’ I feel a lot better now, so I can talk while smiling.

What is the most memorable moment from your 25 years of work?

In 1994, during the Rwandan Civil War, we formed a medical team and went to a local refugee village. It was horrifying. We moved about 5,000 cadavers everyday in a large truck. Drinking from a contaminated lake resulted in an immediate cholera infection. We saved at least 200 cholera patients each day.

In 1997, I visited Pyongyang for the first time as the head of the UN-affiliated NPO group. I had over 120 trips to Pyongyang after my first one. We sent 500 cattle and built a factory for them. But I have not been there since 2008.

What is the most difficult voluntary activity?

Good Neighbors has a child abuse report center stationed in each domestic region and we are currently operating a group home for child abuse victims. We have limited personnel so our staffers are exhausted from being on the hotline every day.

What direction should NPOs take?

There needs to be at least one NPO stationed in each neighborhood that can cooperate with the residents to solve local social issues and expand the ‘Grassroots NPO Movement.’ In order to make that happen, corporate donations should go to private agencies.

Good Neighbors has over 1 million members and it is now the only organization that ranks in the top 10 for donations among domestic NPOs. I feel a sense of accomplishment for leaving my mark on this trail. As for immediate plans, I am planning to go to the Good Neighbors branch in the United States to globally attract funds and support North Korea.