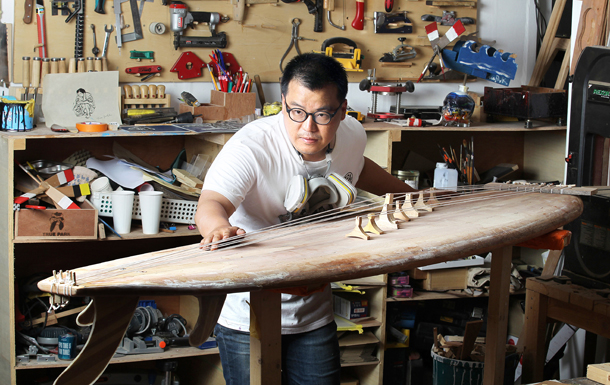 “When designing a surfboard it’s important to understand the sea,” says Park Chul-woo, one of Korea’s few surfboard shapers.

“Korea’s sea waves are relatively low,” he says, “so the surfboard rocker needs to be nearly straight.”

A surfboard’s rocker is essentially the bottom of the board. It can have varying degrees of curvature and is generally considered the most important part.

The 38-year-old Park is currently the head of True Park Studio, which produces surfboards and art projects, including traditional Korean art.

On Tuesday, when the JoongAng Ilbo visited Park’s workroom in Gyeongju, a surfboard stood propped in front of the entrance. The 2-meter (6.6-foot) board had been painted over with Shin Yun-bok’s “Portrait of Beauty,” one of the most famous paintings of the late Joseon dynasty. Park drew the painting on Korean handmade paper, or hanji, and then applied it to the surfboard.

“I drew the portrait on hanji for two days and I carved it onto the surfboard,” Park said. “It’s actually common to use a kind of hanji called logo paper to carve patterns onto surfboards.”

Park, who studied art in the United States, started making surfboards in 2008.

“I saw someone surfing for the first time at a beach in California when I was studying abroad,” he said. “I was studying sculpture and so I was naturally led to the beauty of the streamlined surfboard.”

But surfing was not widely known to Koreans then, so it wasn’t easy to collect basic materials to design a surfboard.

“I learned how to make surfboards myself by going through foreign websites and books,” Park said. “Surfers started to recognize me when I began uploading information I collected on the internet.”

Park makes his surfboards entirely by hand. He begins by shaping Styrofoam embedded with wood frames, then coats the board with glass fiber. The process takes about 20 days.

Last year there were rarely any orders, but a new surfing boom is sweeping the nation and Park is now manufacturing five types of customized surfboards.

“People can choose customized surfboards that best fit their style while paying only about half the cost of an imported board,” said Park, whose surfboards cost around a million won ($881).

Park is also pursuing some projects that combine Korean traditional culture and western surfing culture. He has recently been working on a surfboard that can also be used as a gayageum, a Korean zither with twelve strings. He even consulted with a gayageum master at a gayageum museum in Goryeong, North Gyeongsang.

“I was reading through a textbook for oriental arts when I was studying in the U.S. and I found that 350 pages were about China, 90 pages about Japan and only five pages were dedicated to Korean arts,” Park said. “I began working on these pieces with the hope of introducing Korean traditional culture to Westerners using familiar media such as surfboards.”

He added that when the gayageum surfboard is completed next month, he will make a video of someone actually playing the instrument and introduce the clip to the world via YouTube.

When asked why his workroom is located in Gyeongju, North Gyeongsang, rather than near the sea, he said “My father made traditional yeot, Korean taffy, for over 50 years, and I had a big sense of duty that I should take over the family business in my hometown.”

He makes yeot from dawn until morning at a manufacturing facility on the first floor, then moves up to the second floor in the afternoon to work on his surfboards.

“From now on,” he said, “I want to contribute to developing Korea’s own surfing culture.”