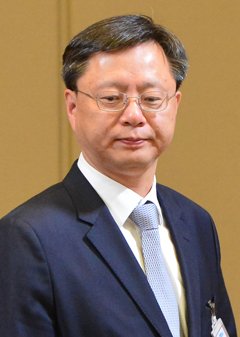 The wife of presidential aide Woo Byung-woo jointly owns a country club worth at least 170 billion won ($149.78 million) with her family.

When her husband declared his assets upon taking the job at the Blue House, he claimed her 20 percent share was worth only 300 million won, the JoongAng Ilbo reported Friday.

This was just the latest in a series of alleged irregularities surrounding Woo, senior civil affairs secretary to the president, and his family. One of the accusations involved a dubious sale of his wife’s family estate to the game developer Nexon. The deal was allegedly arranged by Jin Kyung-joon, a senior prosecutor and Woo’s close associate, who is currently detained on charges of receiving bribes from Nexon.

The JoongAng Ilbo reported Friday that Woo’s wife owns impressive assets inherited from her father, but only a fraction of their value was declared when Woo disclosed his assets as required of a senior civil servant. Analysts said the misrepresentation may have exploited a loophole in the current assets disclosure system, which they urged to be closed.

According to the public records of the Financial Supervisory Service, Woo’s wife has jointly owned Sam Nam Kae Bal Co., Ltd, a company operating the Giheung Country Club in Hwaseong, Gyeonggi Province, with her mother and sisters since 2008. She inherited the asset from her father Lee Sang-dal, a successful businessman who died in June 2008. Lee owned 50 percent of Sam Nam; the Korean National Police Veterans Association owns the rest.

Two months after Lee’s death, his wife and four daughters established SD&J Holdings to hold their stake in the country club operator. They each own a 20 percent stake in SD&J Holdings. Sam Nam pays its annual net profit to SD&J Holdings and the association of veterans. Since 2008, SD&J Holdings received 19.1 billion won in dividends from Sam Nam.

A 2015 audit of Sam Nam showed that the book value of the company’s 2.22 square kilometers (548.6 acres) property was listed at 16.5 billion won, and its appraised value is about 172.2 billion won. In the real estate industry, a country club is worth about double its appraised value. The properties of Woo’s wife, however, were not declared when he disclosed his family assets. 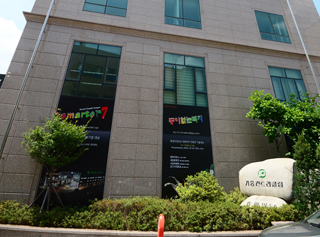 The Public Service Ethics Act requires a public servant to report his or her family members’ unlisted stocks by their face value. “Creating a holding company and handing down assets is a tool to avoid inheritance or gift taxes,” a tax accountant told the JoongAng Ilbo.

Through Jeonggang, Woo and his family managed to minimize their tax payments, because the 22-percent corporate tax rate is lower than the income tax rate, which is as high as 38 percent. Jeonggang is a company offering property sales and rental services and rental of construction machinery. It was established in 1993.Woo’s wife is the president and largest shareholder, with a 50-percent stake. Woo owns 20 percent, while the couple’s three children each own 10 percent.

Jeonggang reported a total of 252.47 million won in profit last year. If an individual earned that amount of profit, about 100 million won in tax will be levied under the global income tax system. The company only paid 9.69 million won in corporate income tax. Because the company receives tax benefits as a small enterprise, its corporate tax rate was 6.45 percent.

Jeonggang spent no money on employee salaries last year. It did, however, record 133.93 million won in operational expenses including an entertainment account and maintenance of a car. A corporate vehicle is tax deductible.

Tax experts said managing assets via a holding company is a typical way of avoiding tax by the rich. It also allows a high-ranking official to declare smaller amount of assets when declaring his assets.

“Listing individual assets as company assets for tax benefits is no different from creating a shell company in a tax haven,” said Ahn Chang-nam, a professor of tax administration at Kangnam University.

Meanwhile, political pressure from the ruling and opposition parties for Woo’s resignation grew on Friday. Lawmakers said Woo must face a prosecution’s investigation after stepping down from his post. The Seoul Central District Prosecutors’ Office formally launched an investigation Thursday into the dubious sale of Woo’s wife and her family property to Nexon. A civic group, Spec Watch Korea, filed a petition to the prosecution to investigate the 2011 sales, allegedly arranged by prosecutor Jin.

The prosecution will also investigate two defamation charges filed by Woo against two major newspapers. Woo said the media reported groundless accusations against him. All three cases will be handled by Lee Jin-dong, a senior prosecutor specialized in corporate corruption.

As Woo resisted the snowballing pressure to resign, Rep. Chung Jin-suk, floor leader of the ruling Saenuri Party, said Friday that the National Assembly’s House Steering Committee will ask Woo to testify. “Until now, the senior civil affairs secretary is customarily exempted from testifying in the legislature,” Chung said. “But Woo is involved in a scandal and lawmakers will want to question him.”

While her top aide is embattled in a growing scandal, the Blue House said Friday that President Park Geun-hye’s controversial remark made earlier should not be interpreted as a defense of Woo.

At a National Security Council meeting on Thursday, Park urged aides to “never try to avoid criticisms when you act for a just cause” and “treat hardships as your friends and squarely act according to your convictions.” The ambiguous remarks were interpreted as a defense of her scandal-plagued civil affairs senior secretary.

Presidential spokesman Jung Youn-kuk said Friday morning that the remark was not a message about Woo’s scandals, stressing that Park was addressing North Korea’s escalating provocations. According to Jung, Park will take her summer vacation from Monday through Friday, but she will stay in the presidential compound. “She will review arrears of documents and take rest,” Jung said.