K-League’s first goalie to ever score takes his bow

K-League’s first goalie to ever score takes his bow 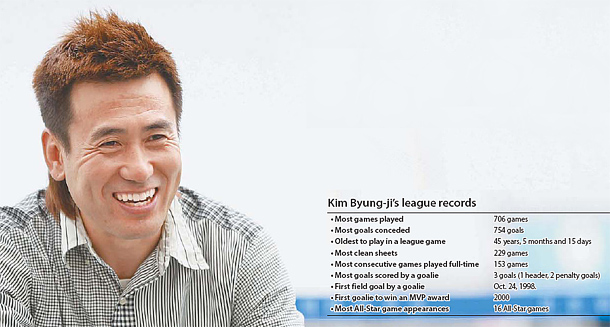 Kim Byung-ji reflects on his football career after announcing his retirement on Tuesday, closing a prolific 24-year career. Kim hopes to continue his legacy in Korean football as a coach. [OH JONG-TAEK]

It’s the end of an era in Korean professional football. On Tuesday, Kim Byung-ji, a goalkeeper and one of the most celebrated figures in the K-League Classic, announced his retirement from the game, marking an end to a prolific 24-year career.

Casual watchers of the sport may know him best for his ponytail, but older fans of the K-League may remember Kim from one particular moment in October 1998, when he took part in Ulsan Hyundai FC’s offensive effort to break the tie with the Pohang Steelers and become the first goalie to score in K-League history.

Since then, Kim has become a symbol of Korean football, and as he departs from the field, he is leaving behind many records. He went 229 matches without conceding a single goal. He played full time in 153 straight games. In September 2015, he became the oldest player to compete in a K-League match. And this is just the tip of the iceberg.

“I think nicknames such as ‘ponytail’ and ‘a goalie who scores’ are more valuable than anything else,” Kim said. “Fans gave them to me, and they show the affection by the fans for me.”

For 13 years, Kim also played in 61 international games wearing the Korean national team jersey. But even with a combined pro and international career, Kim has some regrets.

“It was disappointing not being able to play any games during the 2002 Korea/Japan World Cup,” Kim said. “When there are two players who are similar in terms of football skills, who gets to start and who remains on the bench comes down to trust from the manager. I was unable to earn the trust of manager [Guus Hiddink].”

During a match against Paraguay in 2001, Kim dribbled the ball up to the half-line but got it taken away from him. Paraguay nearly scored a goal taking advantage of Kim’s error, and this infuriated Hiddink. Ever since, Kim was unable to see much playing time under Hiddink’s management.

“That was foolish of me,” Kim recalled. “I learned how a veteran should go about each game from that experience, how older players of a team should devote and sacrifice themselves for the team. The lesson I learned from that experience allowed me to stay for a long time in this game.”

Kim considers Lee Woon-jae as the biggest rival of his football career. Lee, a retired goalie best known for his performance back in the 2002 World Cup, is now a goalkeeping coach for the Korean Olympic football team.

Kim distinctly remembers when Lee blocked his shot during a penalty shootout in 2004 during the K-League Class finals. Kim was playing for the Pohang Steelers then, and Lee was in the Suwon Samsung Bluewings.

When asked why a goalie was chosen for the penalty shootout, Kim said, “Choi Soon-ho [then-manager of Pohang] placed me as the fifth kicker even during practice. I think he took into consideration that I was experienced and at the top of my physical condition. The error came during one of the most decisive moments in K-League history, so I think many people remember clearly about that shot. But I think it is these kinds of stories that allow fans to be so fond of me.”

Indeed, the goalie has many stories to tell from his career. After graduating high school, Kim failed to get into a college and worked various part-time jobs including in construction.

His foray into football came when he entered Sangmu FC, the predecessor of military club Sangju Sangmu FC, in 1990. Sangmu was an amateur team then. After spending two years in Sangmu, Kim joined Ulsan Hyundai FC as a walk-on.

“I feel like I started out as a nobody but finished my career at the top,” Kim said. “I remember when I first failed to be drafted, I worked as a welder at various construction sites. But I kept on playing this game and eventually became the highest-paid player in the league.”

The 46-year-old player credits strict self-management for his success. Indeed, throughout his 24-year career, he has maintained his body weight at around 78 kilograms (172 pounds), even to this day.

After failing to extend his contract with the Jeonnam Dragons last season, he helped younger players improve their game. Shim Min, a goalkeeper for Boin High School who led his team during a national football tournament early this year, credited Kim for his outstanding performance, saying he was able to block shots during penalty shootouts thanks to Kim’s instructions.

Kim says he would like to continue with coaching. At the moment, no manager in the top pro league has come out of a career as a goalie. Kim hopes to change that around.

“No one has conceded more goals than me [754 goals in 706 games],” Kim said. “This is not something to be embarrassed about. This is a valuable asset for me.”