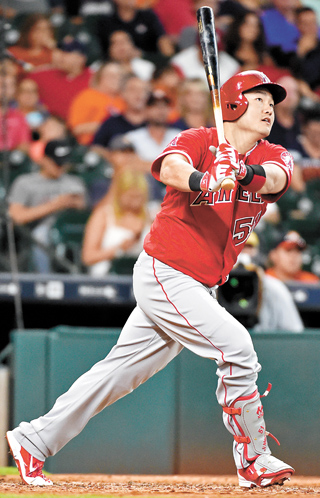 The Los Angeles Angels’ Choi Ji-man hit his second major-league career homer on Sunday during a game against the Houston Astros, but his effort was for naught, as Angels starting pitcher Jered Weaver gave out six runs in the first four innings to lead the Angels to a 7-2 loss.

During the game at a packed Minute Maid Park in Houston, Choi played first base while batting sixth.

In his first at-bat during the top of the second inning, Choi smacked Collin McHugh’s first pitch, a 85.4-mile-per-hour cutter, but was grounded out, unable to make any impressions in an otherwise slow game.

But at the bottom of the inning, Weaver began to slide, giving out a base on ball, a single and a three-run homer. It was Choi who eventually came to the rescue, when he caught a pop fly in foul territory from the Astros’ Jake Marisnick to conclude the inning.

Choi’s next at-bat was not until the top of the fifth. By then, the Angels were behind 6-0. As the first batter of the inning, Choi made solid contact against the fifth pitch by McHugh and went deep.

He blasted McHugh’s 88.5-mile-per-hour four-seam fastball to right field to send a solo jack and scored the first run of the day for the Angels. But the inning came to an end quickly as three batters after Choi were retired by McHugh.

Even though Andrelton Simmons and his single brought home Yunel Escobar during the next inning to add another run for the Angels, they were unable to overcome the early deficit during the latter half of the game and eventually yielded to the Astros’ dominance in the field.

The Astros have claimed 10 consecutive victories against the Angels, who went on six-game winning streak after the All-Star break before facing the Astros on Saturday.

Choi, who joined the Angels through the 2015 Rule 5 Draft, a recruitment process to prevent teams from stockpiling too many young players in the minor league, has been going back and forth between the majors and minors this season.

He was listed in the opening day roster but cleared waivers in May and eventually was demoted to the Triple-A Salt Lake Bees, a minor-league affiliate of the Angels. He then came back up to the majors earlier this month to replace injured first baseman C.J. Cron.

Choi’s first dinger came on July 19 against the Texas Rangers. Going 1-for-4 with one home run, one run batted in (RBI) and one run scored, Choi’s season batting average (BA) saw a slight increase from .156 to .163 as of Sunday.

Elsewhere in the majors, the return of the Baltimore Orioles outfielder Kim Hyun-soo from the disabled list seems imminent, as he is slated to play today and tomorrow on rehab assignment.

After straining his right hamstring on July 11 while running to first base, Kim was listed in the Orioles’ disabled list, retroactive July 11. According to MLB.com, Orioles manager Buck Showalter said he wants “Kim to complete two rehab games before his return.”

After the rehab jobs, Kim will be eligible to get off the 12-day disabled list starting from Wednesday, depending on how he does with the Double-A Bowie, the minors affiliate of the Orioles.

Meanwhile, Kang Jung-ho of the Pittsburgh Pirates went into the team’s game on Sunday against the Philadelphia Phillies as a pinch-hitter during the bottom of the eighth.

The Pirates edged the Phillies 7-4, but Kang made no notable plays, getting out off of a foul ball pop-up in his only at-bat of the day.