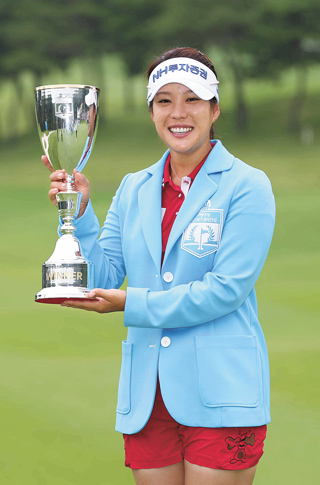 Lee Seung-hyun with her trophy from the inaugural MY Moonyoung Queens Park Championship on Sunday. [KLPGA]

Lee Seung-hyun clinched her first KLPGA title of the season, topping the inaugural MY Moonyoung Queens Park Championship on a sweltering hot Sunday at Seowon Valley in Paju, Gyeonggi.

Her maiden wire-to-wire win came after the third round, when she shot 3-under to aggregate 18-under for the tournament. Lee’s performance left everyone in awe, grabbing 19 birdies while making only one bogey.

On the first day of the tournament on Friday, Lee shot 8-under 64, pocketing four birdies before the midpoint break and adding four more in the latter half. She finished the first day as an unrivaled leader.

Lee had a rather slow start on the second day. Although she began strong with a birdie at the par-4 first hole, Lee saw no birdies for the next eight holes.

But her brilliant performance in the second half of the round put her again in the lead. Lee took home six birdies from the 10th hole to the 18th hole, going on a birdie spree at one point from the 12th to the 14th. Although she was one birdie short from the previous day, no one was going to be able to match Lee at this point.

As an overnight leader, she was placed in the final group of the round on Sunday along with Jung Yeon-ju and Cho Jeong-min, who finished as runners-up the previous day. Lee was spotted earlier in the day training and doing light exercise before the tee-off.

Lee began the final day with pars and had her first bogey of the tournament at the fourth hole. This worried the gallery, who thought she wore herself out during the past two days and in the morning and had no more strength left to finish strong.

Lee proved them wrong. Staying composed in the midst of the murmuring crowd, she finally notched the first birdie of the day at the par-3 eighth hole and extended her lead to two strokes before the break.

As soon as she came off the break after the ninth hole, Lee snatched a birdie at the 10th, widening the gap to three strokes. By the time Lee, Jung and Cho came out of the 15th hole, Lee had grabbed three birdies in the final round and led by four strokes.

Then came the par-5 16th hole, the decisive moment in which the outcome of the tournament was essentially decided.

After teeing off, Lee was in her third shot. She took a swift and smooth swing, and her approach shot landed just about 1 meter (3 feet) away from the pin. Her fourth shot of the hole was going to be a birdie putt. If she nailed this, she would extend her lead to five strokes, leaving no chance behind for runners-up such as Jung and Cho to take a comeback victory.

As important as this shot was, Lee approached it the same as other shots she had been taking all day, focused as if this was the last shot of the day. She pushed in the putt for birdie after careful analysis and drove it in the hole to seal her victory.

Lee went and saved par at the remaining holes to conclude the tournament 18-under 198. Taking 100 million won ($88,000) out of a 500 million won purse, Lee is now ranked fourth in the KLPGA Official Money rankings with just over 429 million won so far this season.

When asked about what went right during the past three days to claim her first wire-to-wire win, Lee said, “Everything went well, but my approach shots especially stood out and gave me a lot of birdie chances.

“Things did not go so well during the first half of the third round,” she added. “But this happened during the second round as well, so I stayed calm and didn’t freak out. I think not worrying about it helped.”