Pre-Olympic Rio is getting safer

Pre-Olympic Rio is getting safer 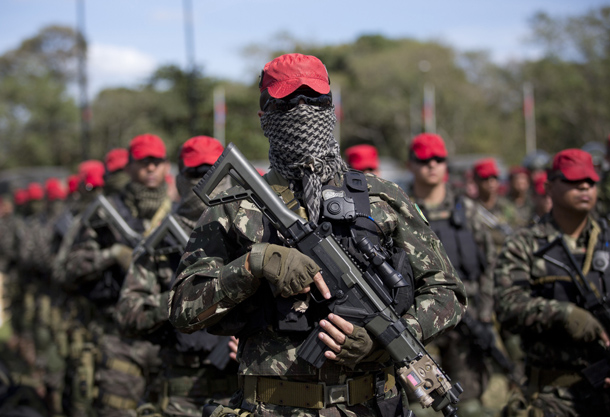 Soldiers who will be deployed during the Olympic Games are presented during a ceremony in Rio de Janeiro, Brazil, July 8. [AP/NEWSIS]

Usually, the most challenging part of my Monday routine is navigating Rio de Janeiro traffic, which has become fraught in the run-up to next month’s Olympic Games. This week it was the anti-bomb squad.

A block from my daughter’s school, police had blockaded four city blocks in Leblon, a tony beachside neighborhood, after a furtive man dumped a small object on the sidewalk and hurried off. Over the scrum of reporters and rubbernecks, I could make out a blue gym bag with an airlines tag that a bomb disposal robot had sniffed and dragged to the street.

Happily, it was a false alarm: A cop in a blast-protection suit opened the duffel and pulled out a wad of old clothes. Cue the collective sigh and nervous chuckles.

Who wouldn’t be edgy? In less than three weeks, Rio will host the world’s most prestigious sporting event, with possibly record-setting crowds and thousands of athletes (though maybe not the Russians) to safeguard.

In the wake of the massacre in Nice, the Rio airports were bedlam this week as passengers waited for hours at checkpoints thanks to new security protocols inspired by the terrorist attack.

Authorities insist that Rio will be safe. The Australian Paralympian sailor, mugged at gunpoint while training last month, may beg to differ.

But while anxiety understandably is running high, there’s likely never been a safer time to be in Rio, which has been saturated with police, soldiers, intelligence operatives and explosive experts in the run-up to the summer games.

What’s less certain is what will happen after the closing ceremony on Aug. 21, when all these guardian angels and their fancy gear will be gone. It won’t help that Jose Mariano Beltrame, the respected state security secretary, is expected to step down after the Rio games.
It takes a lot to rattle a Carioca, as residents of Rio call themselves. A daily diet of news about street violence and criminal mayhem has calloused the nine million people living in Brazil’s blighted beauty to the worst hazards of urban life.

From January through May, the state of Rio de Janeiro logged 2,083 homicides, up 13 percent over the same period last year. In terms of body count, that’s one Nice attack every six days.

Not surprisingly, my bomb-scare adventure was competing that day with news of other emergencies, including a grenade found a few yards from a police station, a band of vandals who set cars ablaze during a midnight rampage, and the search for the armed gang that last month shot its way into a public hospital to rescue a wounded drug lord.

The recent spike in violence is real, and frightening, but the understandable panic it generates risks overshadowing the broader story about crime-fighting in Rio, which has been a qualitative success. The murder rate has plunged by more 30 percent in the state of Rio and by almost half in the capital city since 2008, when authorities launched a program to pacify crime hotspots with permanent police outposts.

This is a development as important as it is overlooked. “There’s this perception that violence is spinning out of control. In fact, Rio hasn’t been this safe in years,” said Robert Muggah, of the Igarape Institute, a Rio-based security think tank. “The problem is, how do you get this message out?”

Muggah allows that Rio’s finest have a long way to go. Police have solved only one in five homicides committed in 2014, the last year for which full statistics are available. Violence at the hands of police also has jumped alarmingly. But so has the number of cops killed on and off duty — 61 so far this year, against 98 for all 2015. That includes 9 officers killed in so-called “pacified” neighborhoods where police nominally have control.

One challenge is that the police hail from the same mean streets as the criminals, and often respond to violence in kind. A Stanford University survey of 5,000 Rio police found that 18 percent had personally witnessed a homicide during their childhood and 32 percent had family members or friends who had been murdered.

Another is that Rio has been slow to adopt modern, computerized methods of policing, such as real-time satellite mapping of crime hotspots. That failing means Rio police are often a step behind the bad guys and fighting virtually blind.

Fortunately, that may be changing. A group of 50 concerned Rio business executives has pledged funds to create Latin America’s first tailor-made crime analytics tool. That may sound like a modest gesture given the rescue mission at hand. But it’s an important signal that the city Brazil has pledged to make safe for Olympians is not just a Potemkin village that will return to mayhem when the world turns its eyes away.


*The author writes about Latin America for Bloomberg View.