Secretary Woo must step down

Secretary Woo must step down 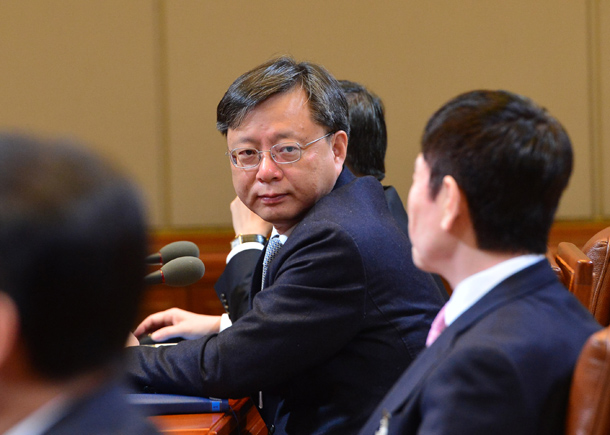 Woo Byung-woo, senior presidential secretary for civil affairs and a former prosecutor, is under suspicion for his alleged involvement in another senior prosecutor’s bribery scandal as well as his own family’s scandal. [JOINT PRESS CORPS]

How much Woo Byung-woo would inherit had been the talk of his colleagues at the Seoul Central District Prosecutors’ Office and Supreme Prosecutors’ Office after his rich father-in-law Lee Sang-dal, owner of the Giheung Country Club in Gyeonggi, died in June 2008.
He denied he would inherit such huge wealth. Woo, the senior presidential secretary for civil affairs, claimed his house was seized because the family could not afford the tax on the inheritance.
Confounded by Lee’s sudden death, his wife’s family was hit with an astronomical inheritance tax. The family was able to pay off the inheritance tax and get out of collateral securities after it sold an office building near Gangnam Station in southern Seoul in March 2011 to game company Nexon for around 132 billion won ($116 million).
Woo’s assets — or his wife’s — came under the spotlight during an investigation on Jin Kyung-joon, a senior prosecutor currently detained on charges of taking bribes from Nexon, and his role in helping the family of his close associate Woo out of tax troubles. Woo in return is suspected of covering up for Jin’s illegal purchase of shares in Nexon and helping him be promoted to senior prosecutor.
If these allegations are true, Woo must come under judiciary scrutiny for corruption. Woo was chief investigator at the Supreme Prosecutors’ Office and oversaw prosecution cases across the country during the dubious building trade. He could become an accomplice to bribery. The veteran prosecutor should know the consequences of remaining in the spotlight. But he refuses to step down from what he claims is a witch hunt by the media.
Jin has the key to understanding the questionable trade between Woo and Nexon. Jin reportedly denied reports about Woo. Even if he testifies that Woo had talked to Nexon co-founder Kim Jung-ju, it may not be easy to prove Woo’s guilt if he flatly denies it to the prosecution. There is little possibility of taped evidence or a witness.
But Woo is not entirely out of the woods. Jin has no reason to testify against Woo because he needs a powerful presidential staffer on his side to reduce his sentence terms and save assets as much as possible. Woo therefore should step down from the office and comply with the prosecution’s investigation.
Woo’s intransigent and self-justifying nature was a source of concern when he was appointed as senior presidential secretary for civil affairs in 2014. He refused to take any moral accountability when former President Roh Moo-hyun took his own life during a prosecution probe led by him in 2009. He said he had done his job and did not do anything legally wrong.
Woo has become a controversial figure in the past and incumbent governments. If he refuses to step down this time as well, he will further worsen public apathy toward the government and make the president a lame duck.
The media has listed Woo along with other corrupt prosecutors Hong Man-pyo and Jin as faces of the arrogant, elite prosecutors. The reputation of the prosecution has hit rock-bottom. If Woo has any respect for the prosecution and people, he must humbly step down.