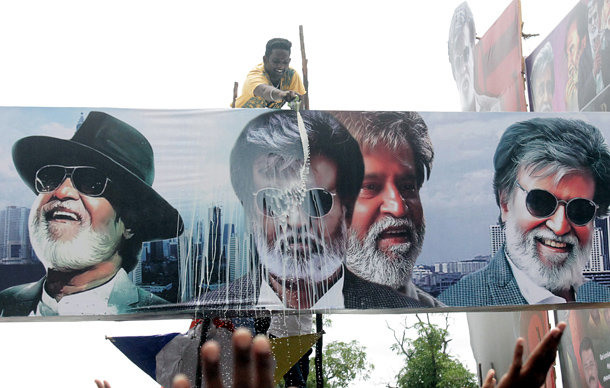 A fan shows respect to Indian superstar Rajinikanth by sprinkling milk on an ad-board with the actor’s portrait in Chennai, India on Friday. Hundreds of Rajinikanth’s fans thronged cinemas across Tamil-language-speaking areas of India to catch the pre-dawn screening of the ganster movie “Kalabi” on Friday. [XINHUA/NEWSIS]

CHENNAI, India - Private companies declared a holiday and parents kept children out of school as an air of celebration swept southern India on Friday for the premiere of Indian superstar Rajinikanth’s latest film.

Hundreds of thousands of fans thronged cinemas across Tamil-language India and Malaysia to catch the early morning showing of “Kabali,” a gangster movie that left patrons jumping from their seats and dancing in the aisles at the sight of their hero.

Crowds waited outside theaters all night before the first showing, and in Chennai, the capital of Tamil Nadu state, Rajinikanth enthusiasts burst firecrackers and distributed sweets outside cinemas.

Inside the Woodlands theater, one of the city’s oldest, fans rose to their feet, danced and sang along as the superstar made his first appearance. When Rajnikanth landed punches on the villain, he was egged on with cheers and whistles.

Huge cutouts of the star and gigantic posters loomed large outside the theater. In several places, fans poured big cans of milk over the cutouts in a Hindu ritual to bless the star and wish him a long life.

Rajinikanth, 65, is one of India’s most popular stars and many of his 150-plus films have broken box-office records. “Kabali” is being released in more than 12,000 screens across India, as well as in the U.K. and Malaysia, which has a sizeable Tamil-speaking population. It also premiered in 400 U.S. theaters. Rajinikanth himself attended a screening in San Francisco on Wednesday.

For one fan, the film came after a long, two-year wait. Alandur P. Sridhar, an insurance company employee, watched the film in a group of 30 fans, all dressed in white T-shirts with Rajinikanth’s picture. They enthusiastically took pictures with a selfie-stick near a poster of the star.

“He’s a terrific actor. But what I love about him is: He may be India’s biggest star, but he remains a simple man at heart. He hasn’t changed one bit,” said Sridhar.

Born Shivaji Rao Gaekwad, the superstar worked as a bus conductor for three years before joining an acting school. He started in small roles as villains in Tamil cinema and worked his way up, even landing roles in Bollywood, the Hindi-language film industry based in Mumbai.

Sandhya Ramani, a graduate student at University of Colorado Denver, said she had timed her vacation to be in Chennai for the film’s release. “It’s something that can’t be explained in words. It’s just Rajinikanth. He’s mind-blowing,” Ramani said, as she exited the theater with her friends.

Shubhra Gupta, one of India’s leading film critics, said the Rajinikanth phenomenon was not easy to explain.

“There is no logic to how and why Rajinikanth has become the superstar of superstars,” Gupta said. But she referred to his impoverished background as appealing to the masses. “People see themselves in Rajinikanth and the fact that he has made it so big,” Gupta said.

Several private companies gave their employees the day off to enable them to catch the film on its first day. Malaysia-based AirAsia organized a round-trip flight from Bangalore to Chennai for the premiere. An AirAsia plane dedicated to Rajinikanth and painted with his picture was flying to 10 destinations in India. AP