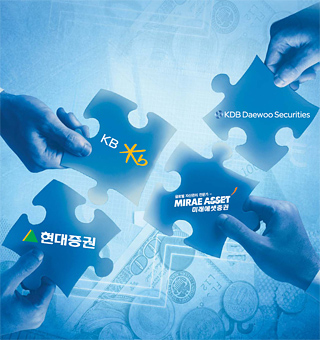 For a long time, Korea’s securities companies have engaged in cutthroat competition for more clients by simply churning out similar brokerage products with low commission fees, resulting in poor returns and a lack of effort to seek new areas for profit.

But Korea’s finance sector is undergoing a major transformation, as a series of big merger and acquisition (M&A) deals have kick-started long overdue consolidation and business diversification in the securities industry.

The proposed strategy by the soon-to-combine units is aimed at emulating the business structure of prominent multinational banking firms by shifting focus from brokerage services to more profitable and specialized segments such as investment banking and wealth management.

The merger between Mirae Asset Securities and Daewoo Securities sparked a flare last year when it created the country’s largest securities company, with an estimated asset value of 5.9 trillion won ($5.2 billion).

Park Hyeon-joo, head of Mirae Asset Financial Group, made clear that with the purchase of Daewoo, the No. 1 player in Korea’s M&A management segment, the combined unit will focus on investment banking.

This deal was followed by KB Financial Group’s bid to buy Hyundai Securities for around 1 trillion won earlier this year.

The M&A deal, due to be completed by the end of this year, will give birth to the third-largest player in the industry, with total assets worth 3.9 trillion won. The new company is pursuing a so-called universal banking model that provides a comprehensive set of financial products and services. The targeted areas include wealth management and corporate and investment banking, lines of business where financiers in Korea have struggled to gain momentum.

Brokerage transactions and investments by firms themselves accounted for 81 percent of net profit by local securities companies in the first half of 2015, the latest data available from the Korea Capital Market Institute, a financial think tank based in Seoul. A combination of wealth management, investment banking and sales of financial products took up the remaining 19 percent.

But in many well-known financial institutions such as Goldman Sachs, the model company for Korean securities firms, over half of their sales and profits come from investment banking that includes underwriting M&As and initial public offerings.

“The securities industry in Korea has been fragmented, and industry players rarely innovate by themselves,” said Park Yong-rin, a researcher at the Korea Capital Market Institute.

The tepidness of securities companies has left them with relatively low rates of return. Over the last four years, the average rate has generally hovered at around 5 percent, which in the local industry is considered exceptionally favorable.

“So far, they heavily depend on commission fees from underwriting deals on behalf of customers,” the researcher said. “The future fate depends on how they devise a distinguishable profit structure. The big financial companies [Mirae Asset and KB] should use the increased assets to rebuild the structure and keep abreast with fast-changing market trends.”

Alongside the merged entities, existing players, too, are investing more capital to expand the range of their services.

Shinhan Investment, the securities arm of Shinhan Financial Group, decided to raise 500 billion won in capital, pushing the company’s capital base up to 3 trillion won. Market watchers see the move as a sign that Shinhan will enter the investment banking business, since 3 trillion won is the minimum threshold needed.

Mirae Asset Securities received the right to operate investment banking services after applying for a license last month ahead of the scheduled M&A with Daewoo Securities.

The acquirer could automatically earn the right to operate after the two units combined in November under the new name Mirae Asset Daewoo. But the company said it nevertheless applied for a license in order to settle the resources and infrastructure needed to undertake the investment banking business as early as possible.

“We’ve been adjusting division structures to make them tailored to the newly-focused services,” a Mirae Asset Securities spokesperson said. “For one, we elevated the status of our Prime Brokerage Service to increase the size and amount of personnel resources.”

The Prime Brokerage Service handles hedge funds, a financial product that a company with over 3 trillion won can offer.

The swift moves reflect an aggressive approach by the company’s chairman, Park Hyeon-joo, to grow the investment banking division.

Park vowed to develop Mirae Asset Daewoo into Asia’s premier investment bank, with a target of 10 trillion won in assets by 2020 and a 10 percent rate of return.

Experts noted that Daewoo’s strong position in investment and asset management was in line with the chairman’s goals and likely led Mirae to pursue the deal.

“Mirae will likely benefit from investment banking and trading thanks to Daewoo Securities’ expertise in investment and asset management,” said Jun Bae-seung, an analyst at eBest Securities & Investment. “With the increased assets and its own capital pulled out from alternative investments like real estate purchases, Mirae will expand its investment banking business.”

Mirae recently embarked on a massive real estate buying spree. This year alone, the group and its affiliates have purchased five offshore properties, taking the value of its property acquisitions to over 2.5 trillion won. The combined figure for the first six months of this year accounts for half of all property investments made by the group since 2006.

Park’s ambitions extend beyond the company’s numbers. He hopes the merger will serve as a counterpoint to the risk-averse sentiment prevalent in Korea’s financial circles.

“Recently, the mood of fearing challenges and investments has been spreading, and [the Korean economy] shows signs of losing its dynamism,” the chairman said in January. “When looking at the brokerage industry alone, despite posting record-level profits, instead of searching for new markets, there is a strong atmosphere of downsizing and lost confidence. We are at a point where new challenges and aggressive investments are necessary.”

To increase efficiency for investment, Mirae Asset Daewoo plans to establish an integrated trading room in Mirae’s Center One building in central Seoul.

The spokesperson added that the role of overseas offices will increase as Mirae sets its sights on the global finance market beyond its home turf.

While many of its peers are reluctant to expand their reach abroad, Mirae has taken the lead in serving offshore clients.

Mirae Asset Global Investments set foot in the overseas market in 2003 with a branch in Hong Kong, becoming the first Korean asset management company to open an office abroad. The company then made inroads into major markets such as Brazil, India, the United Kingdom and United States, and now operates in 11 countries. 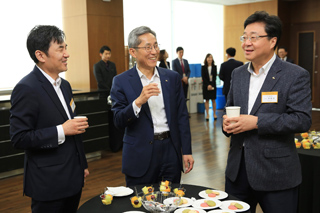 In an era of super-low interest rates, coupled with the weight of soured assets and new digital competitors, traditional banks are under pressure to attract clients and generate meaningful sales growth.

Seeking new profit sources, KB Financial Group acquired Hyundai Securities for an over the book value of around 1 trillion won in June. The revenue of KB Kookmin Bank accounts for 67 percent of the group’s, while its securities arm, KB Securities & Investment, struggles to gain traction.

KB’s chairman, Yoon Jong-koo, mapped out a vision of “universal banking” to provide a broader range of financial services. The company plans to expand its nonbanking businesses to 40 percent of KB Financial Group’s total revenue by strengthening its brokerage and investment divisions.

By combining Hyundai Securities with KB Securities & Investment, the group is benchmarking Bank of America Merrill Lynch, a financial institution that emphasizes both its banking and brokerage businesses.

KB said that the name of the new unit will be KB Securities, and the company aims to begin operations within this year.

Of the different services, wealth management and corporate investment banking will become the major focus.

KB said it will offer services via a one-stop “financial supermarket,” handling insurance, securities and card services as well as banking. The company believes the strategy will lead to an increase in the number of “integrated branches” that manage both banking and brokerage services.

“The aim of universal banking is to provide a comprehensive set of financial products in one place,” Choi said, “So we will increase the number of integrated branches, though now we have around 10 across the country.”

Analysts said the most immediate change from the merger will be the cross-selling of products.

“In the beginning phase, they can cooperate by cross-selling each party’s products,” said Seo Bo-ik, a senior analyst at Eugene Investment & Securities. “Hyundai already has a wide customer network nationwide, and KB Kookmin Bank branches can sell Hyundai’s securities accounts.”