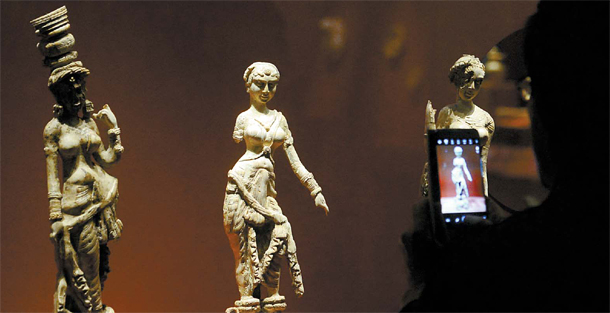 A visitor takes a photo of a statue at the “Treasures from Afghanistan” exhibition currently underway at the National Museum of Korea.

Such is the case with the Louvre’s masterpieces during World War II, as well as numerous Buddhist treasures in Korea during the 1950-53 Korean War. The tales are often considered demonstrative of the inevitable triumph of art and humanity over greed and violence.

One recent story came from Afghanistan, where the country’s ancient artifacts have risked plunder or destruction since civil war began in 1978.

That’s why authorities in 1989 transferred many of the most priceless items into the Central Bank vault at the presidential palace. But due to the tumult that ensued - the rise and fall of the Taliban, followed by the country’s’ first open elections - it wasn’t until 2004 that the vault was unlocked and the hidden treasures revealed again.

They include the famous “Bactrian hoard,” a collection of some 20,000 gold, silver, and ivory objects from burial plots at Tillya Tepe in northern Afghanistan.

Koreans can see this remarkable collection and more at the special exhibition “Treasures from Afghanistan” currently being held at the National Museum of Korea in Yongsan, central Seoul, which showcases part of the contents from the vault.

An international effort organized the exhibition in 2004, and it has been touring the world since 2006, visiting venues like the Musee Guimet in Paris; Metropolitan Museum of Art in New York; British Museum in London; and the Tokyo National Museum.

This year marks the tour’s tenth anniversary, and the National Museum of Korea is the exhibition’s 12th stop.

The exhibition is the first in Korea to focus on Afghanistan’s past.

It features 231 objects from the National Museum of Afghanistan. The objects, found at places ranging from Bronze Age sites (around 2,000 B.C.) to urban sites from the first to third century, are some of the most remarkable archaeological finds in all of Central Asia.

This has much to do with Afghanistan’s geography. Located at the center of Eurasia, the country served as a crossroads for different civilizations. It also occupied a key position along the Silk Road, connecting Europe in the west, China in the east and India in the south.

In fact, there is an object that even shows an exchange with Korea.

A gold crown from the graves of six nomads in Tillya Tepe bears a striking resemblance to gold crowns from Korea’s Silla Dyansty (57 B.C. to A.D. 935). Both feature dangling pieces with motifs like trees, leaves and branches, and the similarities are evident even to a layman’s eyes.

Tillya Tepe was discovered in 1979 by the Russian archaeologist Viktor Sarianidi and his team. It is considered one of the biggest archaeological discoveries of the 20th century.

“The ancient culture of Afghanistan represents a mix between indigenous culture and numerous foreign influences that steadily passed through the region for centuries,” said Baik Seumg-mi, the museum’s curator. “As such, archaeological research in this area has yielded valuable clues about the ancient culture of many different regions.”

Tillya Tepe is one of the four archaeological sites that this exhibition examines. It begins with a collection from the ancient city of Fullol and includes a Bronze Age set of gold relics with intricate, geometric patterns. There are also artifacts from Ai Khanum, a Greek city in northern Afghanistan, and from Begram, which was the summer capital of the Kushan Empire (first to third century A.D.)

“It is a collection of some of the most remarkable archaeological finds in all of Central Asia, pieces that are not only artistically splendid but also reveal a diverse and thriving ancient culture,” National Geographic Society (NGS) wrote on its website. The exhibition is sponsored by NGS, among other institutions.

“Treasures from Afghanistan” runs until Sept. 4 at the National Museum of Korea. Admission is free. The venue is close to Ichon Station (lines No. 1 and 4). For more information, call 2077-9000 or visit www.museum.go.kr.

The exhibition will also be held at the Gyeongju National Museum between Sept. 27 and Nov. 27.