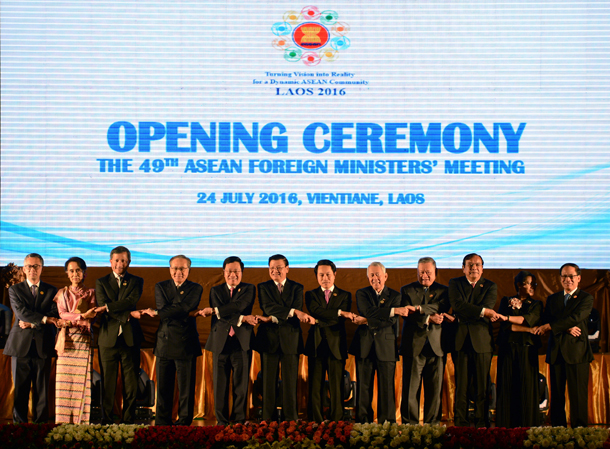 VIENTIANE, Laos - A diplomatic battle between the two Koreas over the North’s nuclear arms program is expected to flare up this week at a regional forum here, where the foreign ministers of Seoul and Pyongyang will vie for support from Southeast Asian nations.

A series of meetings hosted by the Association of Southeast Asian Nations (Asean) has been taking place in the capital of Laos since last week. South Korean Foreign Minister Yun Byung-se as well as his North Korean counterpart, Ri Yong-ho, arrived on Sunday to attend the Asean Foreign Ministers Meeting.

The trip will culminate with the Asean Regional Forum (ARF) on Tuesday. Representatives from 27 countries, including the 10 Asean members and the two Koreas, will participate.

Yun is set to have an extremely busy schedule during his three days in Laos. Starting with a meeting with the Vietnamese foreign minister, Yun will attend a total of 13 bilateral talks and four multilateral talks.

The marathon meetings are meant to help build rapport with the Asean members, which traditionally maintain a policy of equidistant diplomacy toward the two Koreas.

“Because many of the Asean foreign ministers are new, the meetings are intended to serve as introductory sessions,” a senior South Korean government official said. “But we are also paying special attention because the Asean countries’ support is crucial to stopping the North’s additional provocations by strengthening international cooperation.”

Yun is also scheduled to meet with his U.S. and Japanese counterparts John Kerry and Fumio Kishida. A meeting with Chinese Foreign Minister Wang Yi was also scheduled for Sunday night.

Seoul and Beijing’s relationship rapidly soured after the Park Geun-hye administration recently agreed with Washington to allow U.S. deployment of a controversial advanced missile defense system that has rankled China.

Yun is expected to concentrate his diplomatic efforts on growing concern that the North may stage a fifth nuclear test in time with the 1950-53 Korean War armistice anniversary on Wednesday.

“I will try to make sure that all participating countries and most of the foreign ministers will issue messages to the North that it must respect the United Nations Security Council resolutions thoroughly,” Yun said before leaving for Laos.

The Asean chair’s statement, to be issued at the end of the forum on Tuesday, is expected to decide which Korea has come out more favorable.

Previous statements have included the Korean Peninsula issue and condemned the North’s development of nuclear weapons, but the wording has tended to be lukewarm since many Asean members are friendly toward the North and Pyongyang has a history of making a direct defense at the conference.

Last year’s statement, however, contained surprisingly strong criticism toward the North. After the North fired a submarine-launched ballistic missile, the Asean members urged “complete and verifiable denuclearization of the Korean Peninsula” and Korean reunification.

It remains to be seen if such a tone will be maintained this year because Laos, which has long been friendly toward the North since establishing diplomatic relations in 1974, is the chair country.

The regional forum on Tuesday is expected to serve as an international debut for North Korean Foreign Minister Ri Yong-ho, who was appointed to the post earlier this year.

“Despite its hardships under international sanctions, the North is engaged in active diplomacy by sending senior officials overseas,” a Seoul official said. “Because it is his international debut, Ri is expected to act aggressively.”

The foreign minister is a veteran diplomat who has served in key posts in Europe. He became an international figure after participating in negotiations for the 1994 Geneva Agreement between Washington and Pyongyang during the first nuclear crisis. In subsequent negotiations for the light-water reactor project in 1995, he also participated as the North’s chief negotiator.

Ri is known to be a very capable diplomat. “Robert Gallucci, the chief U.S. negotiator at the time, highly evaluated Ri,” said one diplomatic source.

Another South Korean government official, who had met with Ri a few years ago, reportedly told South Korean diplomats that they must be mindful of Ri’s abilities. Ri rose to Pyongyang’s top circle in 2010 after becoming vice foreign minister and winning out against Ri Gun, director general of the North American affairs bureau.

Foreign Minister Ri is also famous for his fluent English. “When I talked to him, he spoke as if he were a native English speaker,” said another diplomatic source. “At the multilateral talks, many North Korean diplomats spoke inflammatory remarks because they were too emotional, but Ri was different. His manner was very polished.”

While no official talks between Yun and Ri are scheduled, they are expected to have some exchanges during the multilateral regional forum.