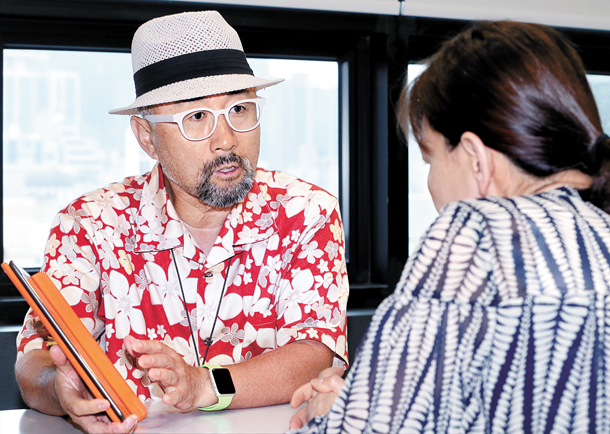 Jung Eun-sang, 62, counsels clients at the MacArthur School, which he founded in 2013 with an aim to help people find new jobs by making the most of smartphones. More than 180 people have studied at his center since its inception. [SHIN IN-SEOP]

Jung Eun-sang, 62, tasted bitterness after he quit his job as a banker in 1999. Following his retirement, he ventured into real estate and education only to see his businesses end in failure. After more than a decade of struggle, Jung found one area no one had thought of before. Having witnessed the powerful impact smartphones had had on the lives of people around him, he created an entirely new job related to smartphone technology.

“I was learning how to use a smartphone seven years ago and I realized there was an infinite number of ways to use the gadget,” he said. “So I had the idea that I could give consultations to people to start anew their careers using the device.”

With his idea, he founded a smartphone education center called the MacArthur School in May 2013, named after former Allied Forces Commander Douglas MacArthur who served during World War II and the Korean War and who is widely respected in Korea for his role in changing the tide of the Korean War.

Over the past four years, more than 180 retirees have enrolled and learned from his lessons on how to make the most of their smartphones. Among the graduates, one became a painter who uses an iPad to create works of art while others have become “mobile cooks,” sharing their recipes via smartphone applications.

“To live to be 100 years old, one must be ready to face the other 50 years of life just as they faced the first 50,” said Nam Kyung-an, director of the northwestern Seoul branch of the 50+ Campus run by the Seoul city government, which aims to assist retirees in gracefully living out the second chapter of their lives.

“And the first way to doing that,” said Nam, “is not to fear or hesitate experiencing and learning new things.”

While Jung is seen as a example of one who has benefited from braving a career path, government data show a majority of retirees in their 50s become self-employed workers, mostly by opening up mom-and-pop food-chains.

“What middle-aged people need upon retirement is a job that matches with their interests and abilities,” said Kim Joong-jin, a researcher at the state-run Korea Employment Information Service, “one which they can work at for over 30 years.”

Taking note of Jung, Kim said a good way to begin their second career would be by embarking on a new job, untried by others.

A number of new jobs have popped up thanks to the emergence of new technology, such as the 3-D printer consultant. New occupations such as housing rental manager, senior adult life coach and damage-control consultant for corporations have also emerged over the past few years.

Kim Ki-seon, 63, is another example of someone who has benefited from pioneering a new job field. He claims he is, as the director of the education center Hope Planning-Talent Sharing Institute, a master at helping people realize their career ambitions.

Drawing from 30 years of work experience as a designer at Daewoo Electronics, he said, “I help people with business ideas reach out to potential investors in order to launch their own business.”

Among the new jobs Kim has helped people launch is one that can be called “toy consultant,” a person who helps parents choose the right toys for their children based on data ranging from the child’s personality, age and interest.

The government is catching up with the trend of retirees venturing into uncharted territory and is considering ways to provide subsidies for educational programs.

“Creating a new job field can be a driving force that helps bring about the Fourth Industrial Revolution,” said Employment and Labor Minister Lee Ki-kweon, “With that in mind, the government has started preparing to present new policies.”