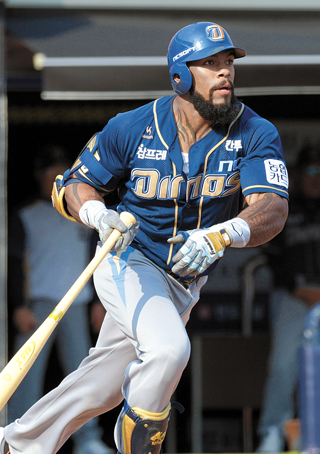 Eric Thames of the NC Dinos, top, and Dustin Nippert of the Doosan Bears, bottom, are each leading the league in batting and pitching. The Dinos and the Bears are favorites to compete in the Korean Series this year, thanks to their efforts. [NEWSIS]

It may be the Korea Baseball Organization (KBO), but this year, the top pitcher and batter in the league are both American.

Dustin Nippert of the defending Series champion Doosan Bears, currently in his sixth season as the team’s ace pitcher, an unusually long tenure for a foreign player, ended the season’s first half leading in earned run average (2.26) and wins (12).

Nippert’s club, the Bears, finished the first half of this season at the top of the league, making them the favorites once again to win the Korean Series this year.

Nippert himself has had a productive first half, and even after the All-Star break, he still leads in wins with 13 and earned run average with 3.16 as of Monday. Although he climbed down a step in winning percentage, he is only .008 behind leader Eric Hacker of the Dinos. Nippert is a likely candidate to win titles in all three categories.

The pitcher’s industriousness is well known in the league. Since coming to Korea in 2011, he has tossed in more than 700 innings. Besides Nippert, there are only seven other pitchers who have pitched over 700 innings since 2011. 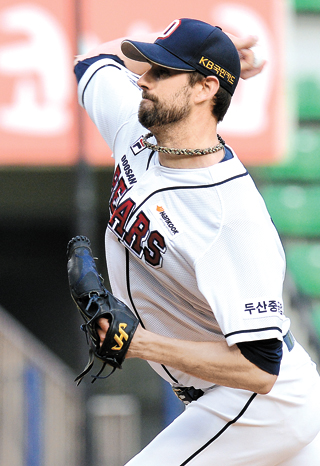 Had Nippert not been absent for an extended rehab period last year, his KBO career records would have soared much higher.

While making his mark in Korean baseball, Nippert is yet to add a couple of accolades to his trophy case, namely a regular season team title and his own individual title. Although Nippert and the Bears have kept a steady pace in the past few seasons, finishing the regular season near the top, they have repeatedly failed to claim the regular season trophy.

But this year looks different. The Bears have dominated the league from early on, and a successful season for the team means a plus for Nippert.

“It is not about personal records,” he often says. “It is the team’s win, not mine.”

Whenever he is interviewed after clinching a win, Nippert often cites his teammates for backing him up. As an ace pitcher who has remained rock solid for the Bears, Nippert may finally have a shot at the elusive titles this season.

The only person stopping him might be Thames of the Dinos.

Since the beginning of the season, Thames, who was named MVP last year, has been the target of many KBO pitchers. Striking Thames out means a better chance of taking home a win.

But Thames has not let his guard down. He ended the first half better than ever before and ranked near the top in every category except steals, which seemed unnecessary for Thames considering he was in the lineup alongside Na Sung-bum, Lee Ho-joon and Park Sok-min. With such a lethal lineup, the Dinos have had no problem getting to bases without steals.

Thames did struggle early in the season, with his batting average (BA) at around a meager .200. But the slump did not last long. In May, Thames had at least one hit in 19 out of 22 games, his BA for the month recording .423.

Thames is praised highly on and off the field for his work ethic. Even when he was in a slump, he simply blamed himself and buried himself in training. Dinos manager Kim Kyung-moon said he never had to worry about the slugger.

Many foreign batters are challenging Thames for the MVP honor this season, including Wilin Rosario of the Hanwha Eagles and Luis Jimenez of the LG Twins. But at his current pace, Thames should have no problem protecting the title.