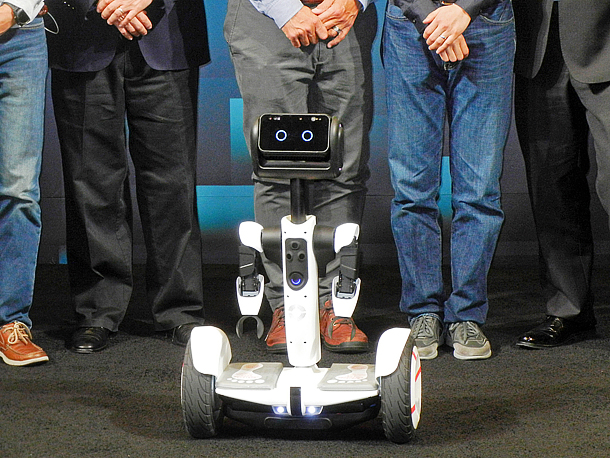 Segway’s new personal robot and scooter is seen during its debut at the Consumer Electronics Show in Las Vegas, Jan. 7, 2016. [AP/NEWSIS]

When the Chinese appliance maker Midea Group announced a bid for the German robotics manufacturer Kuka AG this spring, it seemed like something of an omen. Kuka makes robots that specialize in assembling goods on a factory floor — exactly the kind of work that has lifted millions of Chinese out of poverty.

After opening up to the world in 1979, China focused on tapping its vast pool of cheap labor. From T-shirts to Christmas ornaments, Chinese manufacturers could undersell the world on most any basic product simply by drafting another migrant farmer into a factory.

This was a well-worn path of development. Japan, Hong Kong, Singapore and South Korea all advanced in much the same way: beginning with simple products, such as garments and textiles, and moving their way up to electronics and other cutting-edge goods and services. As their firms and workers grew more experienced and accumulated more know-how, their economies diversified and their people grew richer.

Today, many developing countries are still counting on this model. The problem is that robotics may fundamentally upend it.

Even as global growth slowed, industrial robot sales grew 12 percent between 2014 and 2015, and have grown fourfold since 2009. As robots get cheaper and better, the advantage of employing a low-skilled laborer starts to fade. Even a lowly sweatshop worker will struggle to compete with a robot’s productivity, not to mention its low rates of error and other advantages.

In other words, where poorer countries could once use their cost advantage to lure manufacturers, now all cost advantages are disappearing in the robotics age. A robot costs the same to employ whether in China, the U.S. or Madagascar. That’s why Adidas is nowmaking shoes in Germany — in a largely automated factory, closer to its customers and free from the risks, costs and complexities of a lengthy supply chain.

It’s not alone. Rich countries are repatriating the production of everything from apparel to electronics. Wal-Mart wants to re-shore the manufacture of $50 billion worth of goods over the next 10 years, relying on increased speed and lower costs as key competitive advantages.

The implications of this shift shouldn’t be underestimated. The days of international trade growing at near double-digit rates might be over.

Trade has historically grown at twice the rate of gross domestic product, but in the past few years it has stagnated, leaving it 15 percent lower than would be expected, according to the Peterson Institute for International Economics. It may well have permanently stagnated.
In this new reality, development plans for poorer countries will have to be rewritten. But it isn’t at all clear how to do so.

One step could be investing in “leapfrog technology.” Mobile phones are the much-cited example of this phenomenon: Thanks to cellular, poorer countries have been able to reap all the advantages that phones brought without the expense of laying land lines. In the digital age, it’s possible that other technologies could prove similarly transformative. China has become the largest buyer of industrial robots in the hopes that they’ll help manufacturers make the leap to advanced electronics.

But such technology won’t do much good without a skilled workforce. A factory of robots will require minimal low-skilled labor, but it will need engineers and computer scientists. Investing in education — not just coding skills, but the ability to shift seamlessly between products and to create new products faster than competitors — will be critical. Developing countries should also consider programs to attract skilled labor. China and India, among others, have set up offices to lure home educated workers who have left for richer countries. Investment in people will be increasingly important, whether governments can afford it or not.

Finally, countries trying to boost growth could improve governance and domestic policies. If trade is less important, they’ll need to encourage direct investment flows. If skilled workers are in demand, they’ll need to relax labor policies to attract educated migrants. And if ideas are more important than ever, they’ll need to make life easier for entrepreneurs. In short, they’ll need to solve their own problems.

None of that is easy. And it may not even prove up to the challenge. But the robots are coming, one way or another. Developing countries are the least prepared for that shift — and have the most to lose.