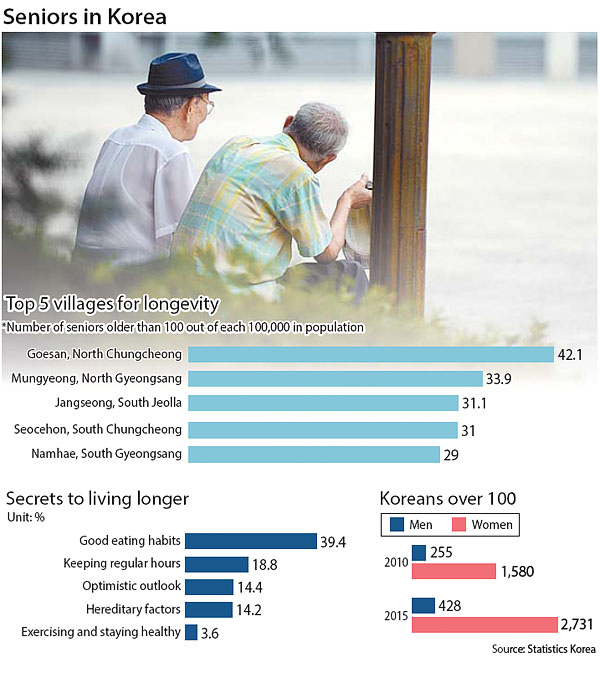 Government data showed that there are more Koreans living past 100. What’s their secret? The majority of them said they stayed away from smoking and drinking their entire lives.

There were 3,159 Korean seniors 100 and older as of November, a 72.2 percent increase from 2010, Statistics Korea said on Monday. Women accounted for 86.5 percent of the total. The statistics agency releases this data every five years.

Goesan, North Chungcheong was the village with the highest longevity rate in Korea. There were 42.1 people older than 100 for every 100,000 residents in Geosan. It was followed by North Gyeongsang’s Mungyeong with 33.9 people and South Jeolla’s Jangseong with 31.1 people.

By the regions’ overall population, Gyeonggi was the place where the largest number of people older than 100 lived with 692 people. It was followed by Seoul (521) and North Gyeongsang (224).

More than 90 percent of seniors over 100 said their partners are deceased. Among those living with their spouses, only 0.3 percent of female seniors had husbands who were still alive.

As far as their secrets to a long life, 39.4 percent of the survey respondents said they care about their eating habits such as eating small amounts of food for each meal. Another 18.8 percent they try to keep regular hours such as spending every day sleeping and exercising regularly. And 14.4 percent of Korean seniors said they try to stay optimistic.

About 77 percent of them said they never drank in their lives and another 79 percent said they have never smoked tobacco. These figures suggest that drinking and smoking may impact how long people live.

Data showed that there are fewer of them living with their family members compared to previous years.

“According to the recent survey, only 44.6 percent of seniors aged over 100 lived with other family members, which is 12.5 percentage points lower compared to 57.1 percent in 2010,” said Lee Jae-won, a director at Statistics Korea.

The percentage of seniors living at sanitariums or hospitals for the elderly rose from 19.2 percent in 2010 to 43.1 percent last year. Near half of caregivers were paid workers, while family members who cared for parents full time accounted for 45.6 percent.

Despite living long, most surveyed weren’t exactly happy. A 34.4 percent of survey respondents said they were happy, while 46.6 percent said they felt “so-so.”

“It appears that male seniors take care of their health and that they are happier than female counterparts,” said Lee at the Statistics Korea.

Near 70 percent of men worked out or took care of their health, while only 59.4 percent of female seniors said they did so. Additionally, 44.4 percent of the men said they were happy compared to only 32.9 percent for women.

Most of seniors spent their day time watching TV, listening to radio and socializing with friends or neighbors.

According to Statistics Korea, 68.2 percent of them knew their full names, while just 42.6 percent knew how old they were. About 67 percent of Korean seniors aged over 100 could recognize their children and only 28 percent were able to count money.