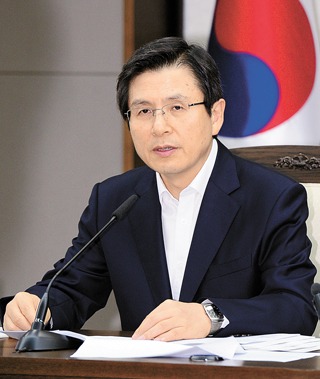 Prime Minister Hwang Kyo-ahn announces the government’s specific plans to construct a facility to store high-level radioactive waste at a meeting at the Seoul Government Complex on Monday. [NEWSIS]

The government finalized its plans to choose a site to store high-level radioactive waste within 12 years and to construct a facility in 36 years.

In a meeting at the Seoul Government Complex on Monday, Prime Minister Hwang Kyo-ahn announced specifics for the project. The government said there are 36 nuclear power plants operating in Korea and each facility will run out of space for storage as early as 2019.

“The size of Korea’s nuclear power generation has expanded for a long period of time and now we have a task of managing radioactive wastes left to be solved,” said Hwang. “It now is the time for us to come up with specific measures to deal with this unsolved issue and we should manage this matter by prioritizing the safety of Koreans.”

Hwang added that the government will thoroughly discuss potential sites with local governments and its residents to minimize backlash.

Since 1983, the government has been trying to find a place to store waste but has failed nine times due to backlash from residents surrounding the chosen sites. The government is emphasizing that the plan should proceed, however, as the country is running out of storage units.

It will take the government about 12 years to choose the site, the Ministry of Trade, Industry and Energy said. The government will first exclude regions that are not suitable for storage and will have qualified regions receive construction approval from the central government. The government will assess whether it is safe to construct the facility in certain regions by examining its geography and by soliciting feedback from local residents.

When the government decides upon a site, it will build an interim storage site and an underground research laboratory, which will test whether the new facility is safe. A permanent facility will be constructed in 36 years after all the processes are complete.

“We will expand the size of dry storage facilities at nuclear power plants to store the wastes temporarily until the new permanent facility gets constructed,” the Trade Ministry said in a press release.

The government also added that it will discuss with foreign counterparts to consider sharing storing facilities overseas. According to the ministry, other countries such as Finland face similar issues.

The Ministry said the project will cost about 63 trillion won ($55.4 billion).