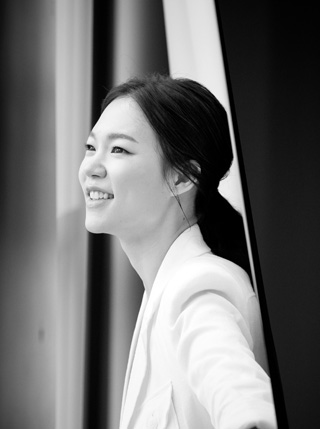 It features five 20-something female college students sharing a house but possessing their own quirks, like a penchant for splurging on luxury handbags or tendency to tell dirty jokes at inappropriate times.

But according to actress Han Ye-ri, who plays one of the students, the show differentiates itself in the way it “realistically deals with lives of young people.”

Han’s character, Jin-myeong, can’t enjoy college life because she’s too busy working part-jobs to pay tuition. Going on dates or hanging out with friends are unaffordable luxuries, and dreams for the future are displaced by the needs of the present.

“Looking at Jin-myeong who can’t dare to dream of her future because the harsh reality she is in, I felt sorry for her and also wanted to root for her,” said Han, 32, during a recent interview with the JoongAng Ilbo, an affiliate of the Korea JoongAng Daily.

“I liked the script because the writer deals with Jin-myeong in a way that’s calm and measured, rather than shrill or melodramatic.”

“There are heaps of drama series that deal with the romantic relationships of people in their 20s, but this one is interesting because it is a reality check about what it’s like to be a young person these days. I could relate to the story in that sense.”

“It was physically challenging to do all the action scenes back then so I kept telling myself that I’m the best swordswomen in the world. Byun Yo-han and I had to memorize all the action scenes choreographed by the martial arts director in one or two hours on the set. It was nerve-wracking.”

Her skill in those sequences were in part a testament to her background as a traditional Korean dancer - her major in university - and she continues to dance professionally.

Han said she finds different pleasure from acting and dancing.

“Acting is collaborative work with many other people and I find pleasure as I create a character that’s written in a script, but dancing allows me to look inside myself. They are so different and opposite and it helps me a lot. I can truly focus on my mind and body when I dance.”

Of all the five actresses who appear in the drama series, Han is the oldest, and she has also had the longest acting career. Still, she said that the other actresses on the show - including singer-turned-actors Han Seung-yeon and Ryu Hwa-young - are both “mature.”

“They are more mature than other girls in their age, maybe because they began working earlier.”

Another distinct aspect of the show is the frank way in which sex is discussed.

“You know, girls often talk about it whenever they get together,” said Han. “They talk about it especially when they are teenagers or when they just enter college because they don’t really know about men but they are still curious about them.”

As the story proceeds, “Age of Youth” will dive more deeply into each individual character, as well as their relationships and conflicts.

“Every house has dirty laundry and these characters also have some stories they don’t want to tell.”

“Age of Youth” began airing from Friday, and it’s in the same time slot as tvN’s “Good Wife,” which features a star-studded cast including Jeon Do-yeon. Jeon may have won the best actress award at the Cannes Film Festival in 2007 for her role in “Secret Sunshine” (2007), which has given her the nickname “Queen of Cannes,” but Han says she’s not worried about the competition.

“It’s a pleasure to see Jeon on the small screen. We’re trying to make and deliver small yet detailed stories about young people. Since the two dramas are different, you can enjoy [ours].”

The scripts for “Age of Youth” have already been finished, but Han wouldn’t say much about what ultimately happens. Still, she did suggest that her character will continue to search for answers.

“This drama keeps forcing Jin-myeong to ask ‘What do you want?’ and ‘What is your dream?’” said Han.

“It seems like young people these days forget about their dreams because of the tough reality. For Jin-myung, she needs to find her dream first and let that process help her grow.”