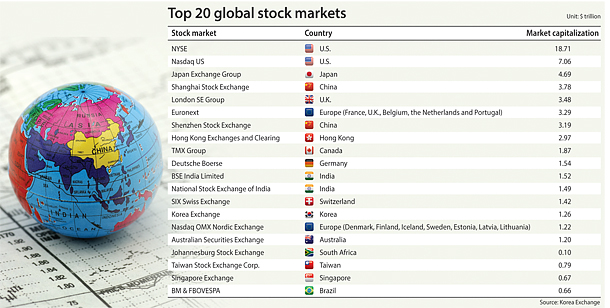 Korea’s main bourse Kospi ranked 14th in the world in the first half, up a notch from the end of last year as market capitalization increased.

According to the nation’s sole stock market operator Korea Exchange on Monday, the market capitalization of the Seoul benchmark Kospi stood at $1.26 trillion won ($1.1 billion), up 2.3 percent from the end of last year. The Kospi ranked 15th on the global market at the end of 2015.

“The Korean main stock exchange has done relatively well in the first half despite numerous unfavorable factors,” said a KRX official.

In fact, KRX said that in the first half of the year global market capitalization shrank from $67.1 trillion to $66.3 trillion during the same period.

By region, the Americas’ stock market grew the sharpest.

Asia and Europe both struggled mostly because of the economic uncertainties in the Eurozone, including Brexit, and earlier concerns of an interest hike by the U.S. Federal Reserve.