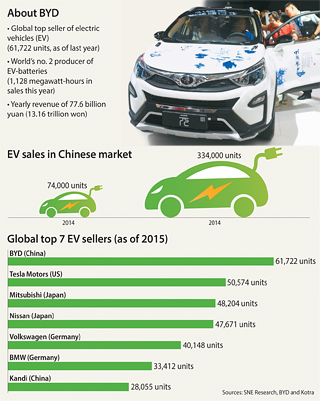 Samsung said July 15 that the investment is aimed to strengthen its semiconductor business for electric vehicles. The nation’s leading smartphone maker has been supplying BYD with chips, sensors and LCD, which are crucial parts for electric cars. Samsung also targets these automotive application components as one of the main propellants of future growth. The company even formed an organizational unit that exclusively handles electric vehicle parts.

“Electric vehicles have more need for these parts than other automobiles that run on oil or gas,” said an industry insider. “Corporations across the globe are paying attention to this industry.”

Samsung is not the only conglomerate to invest in BYD. In September 2008, Warren Buffett, chairman of Berkshire Hathaway, injected $230 million in the automaker for 10 percent of its shares. The decision was considered to have been a mistake, because BYD’s net profit plummeted by more than 90 percent year-on-year in 2012.

However, the investment guru’s choice turned out to be worthy of his sobriquet “Oracle of Omaha,” as BYD is currently the world’s no. 1 electric carmaker, after surpassing the United States’ Tesla Motors, the previous champion of the industry.

The company has a presence in 43 countries and is bracing for global market domination.

BYD’s rise was also propelled by China’s government that subsidizes more than 40 percent of the purchase price of electric cars.

Yet BYD does not owe its success entirely to the state, because it has enough competence to meet rivals in the market. According to SNE Research’s data, BYD is the only company to have listed two models on world’s top-10 car shipments list last year. It is also the world’s second-largest producer of batteries for electric vehicles after Panasonic, as of May.

BYD was founded in 1995 by its chairman Wang Chuan-fu when he was 29. The acronym of the company’s name means “Build Your Dreams.” Wang was born to a farmer’s family in Anhui Province, China, and was orphaned when he was still in high school.

Prior to founding BYD, Wang worked in a battery manufacturer affiliated with Beijing’s General Research Institute for Nonferrous Metals. Although Japan was the industry leader at the time, Wang used his experience to open a business producing core parts of chargeable batteries. His company grabbed momentum by supplying the U.S.-based General Electric and Japan’s Sony with nickel cadmium cells that are cost-effective. BYD’s global market share in 2001 surged from fourth to second largest, based on each section of the battery market.

BYD was listed on Hong Kong’s stock market in 2002. Using funds generated from this offering, Wang acquired China’s Tsinchuan Automobile Company for 269 million yuan in 2003, expanding the business to include completely built cars.

The business environment was favorable for BYD in 2004 as the Chinese government limited investments for future automobile factories to about $240 million, erecting a barrier of entry for competitors. BYD was able to inject the money made from battery sales to research, development and production of automobiles. Currently, the company focuses on both business areas with a 50 percent weight on each. Because it makes the electric vehicles and the batteries for them, BYD gets a synergy of cost benefits and more productivity.

Samsung’s decision was apparently made after considering the future of the industry, said a spokesperson for Kotra’s Guangzhou trade division. “If Beijing abolishes electric vehicle purchase subsidies in 2021, Chinese cars will have less price competitors, opening up the market for both Korean and foreign companies.”