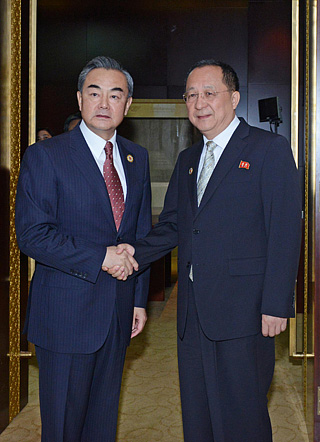 Wang held talks with new North Korean Foreign Minister Ri Yong-ho on the sidelines of the Association of Southeast Asian Nations (Asean) meeting in Vientiane, Laos, on Monday, an indication of warming of relations with Pyongyang.

At the beginning of his talks with Ri, which took place on Monday at noon, Wang emphasized that Beijing “is ready to advance [the two countries’] relations through joint effort.”

This was the first bilateral talks between the top envoys of China and North Korea in two years. The last was during a 2014 Asean Regional Forum (ARF) meeting in Myanmar.

Ri responded, “I hope to form a diplomatic relationship to actively cooperate for the friendship of our two countries.”

On July 11, the two countries marked the 55th anniversary of the signing of a bilateral military treaty. The governments exchanged messages, and the event was seen as an opportunity for them to mend relations strained in recent years by the North’s nuclear tests and missile tests.

Wang and veteran diplomat Ri, who was appointed top envoy in May and made his debut at the conference, arrived in Vientiane on the same flight Sunday afternoon. This drew speculation as to whether Pyongyang would take advantage of Beijing’s diplomatic row with Seoul to chum up with its longtime traditional ally. There was also interest in whether Ri would push for Beijing to recognize North Korea as a nuclear state during this meeting.

The previous evening, Wang indicated that Seoul’s decision on the deployment of the Terminal High Altitude Area Defense (Thaad) system - which Beijing has loudly opposed - undermined the foundation of trust between the two countries.

As he kicked off talks with South Korean Foreign Minister Yun Byung-se Sunday evening, Wang said, “The recent behavior from South Korea has undermined the foundation for our bilateral trust,” referring to Seoul’s decision earlier this month to deploy the U.S.-led antiballistic missile defense system to Seongju County, North Gyeongsang.

Such scathing remarks marked a noticeably chillier tone toward the South by Beijing. The two countries had boasted of better relations than ever in recent years.

Beijing and Moscow both protested Seoul and Washington’s July 8 announcement to deploy a Thaad battery in South Korea by the end of next year, arguing it will undermine their security interests and regional stability.

“In the talks, we explained openly and in detail our position that the deployment of the Thaad system will not undermine China’s strategic security interests,” said a South Korean foreign affairs official after the talks. “China repeated its fundamental stance.”

The Korean Foreign Ministry said in a statement that the two ministers engaged in “candid and comprehensive exchange of views on the North Korean nuclear issue and the envisioned deployment of the Thaad” to Korea.

Yun told Wang that Pyongyang’s nuclear and missile threats “are an issue of survival” for the South Korean people.

He added that Seoul made the decision to deploy the Thaad system to the U.S. Forces Korea as a “self-defensive measure” to ensure the security of the country and its people, “something that any responsible government would have done.”

He also reiterated that its deployment “will not be targeted at any third country.”

The U.S. anti-ballistic missile system comes with a powerful radar system that can cover more than 1,000 kilometers (621 miles). China and Russia are concerned that the radar could be used as a possible method of American surveillance against them.

The AN/TPY-2, a high-resolution, rapidly deployable X-Band radar, is designed to detect, track and identify ballistic missile threats at long distances and at very high altitudes. Washington has emphasized the radar will be configured to the limited terminal-based mode in Korea.

But the ministry said that Yun in his talks to Wang “stressed that the two countries could face various challenges in the course of their cooperation but should not let their overall relations be affected by any particular issues.”

Yun told reporters after his talks with Wang, “We had very sincere and comprehensive talks on our two countries’ mutual interests. There will continue to be opportunities to talk about such issues.”

A series of meetings hosted by Asean has been taking place in the capital of Laos since last week which culminates in the ARF, which kicks off today. Representatives from 27 countries, including the 10 Asean members and the two Koreas, will participate.

The ARF is a rare opportunity for senior diplomats of countries involved in the long-stalled six-party talks to denuclearize Pyongyang to gather together. They include China, Japan, Russia, the United States and the two Koreas.

On the same day, Yun also met with U.S. Secretary of State John Kerry, whom he referred to as “My dear John.”

The two welcomed the Thaad deployment decision and emphasized a “peaceful solution” for the South China Sea issue, taking into consideration Beijing’s opposition to a recent ruling by a UN-supported international tribunal in The Hague earlier this month that denied most of Beijing’s claims over the waters.