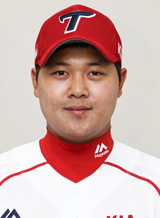 A baseball pitcher who confessed to rigging games was summoned by police Monday for questioning.

Yoo Chang-sik, a pitcher from the Kia Tigers, reported to his team on Saturday that he was involved in a game-fixing scheme in 2014 while playing for the Hanwha Eagles.

Yoo initially confessed that he rigged one game, giving out four balls to Park Sok-min, who played for the Samsung Lions, at the top of the first inning on April 1, 2014. In return, he allegedly received 5 million won from a gambling site broker.

But after interrogation by the police on Monday, it was discovered that Yoo fixed another game on April 19 against the LG Twins, walking a batter intentionally in the first inning. He was allegedly paid 1 million on April 1 and 2 million won on April 19.

NC Dinos’ pitcher Lee Tae-yang and the Nexen Heroes’ outfielder Moon Woo-ram were accused of game fixing last week. Lee was indicted without physical detention and Moon’s case was handed to military prosecutors because the outfielder is doing his military service.

After the news broke, the Korea Baseball Organization immediately announced it would allow players to voluntarily report their involvement in similar cases starting from Friday.

Yoo disclosed his participation in game fixing Saturday. Game rigging is a violation of the National Sports Promotion Act, which prohibits anyone involved in professional sports, be it players, coaches or referees, from receiving any financial benefit for requests made in relation to sports.

Yoo’s confession was announced by the KBO on Sunday. It said in an official statement that it notified the Gyeonggi Bukbu Provincial Police Agency. The body added on Monday that it has suspended Yoo from the league. Under suspension, Yoo cannot participate in any baseball-related activity, nor can he be paid. The KBO will wait for the result of the investigation before taking further steps to reprimand Yoo, although Yoo’s punishment is likely to be lighter than Lee and Moon’s because he confessed.