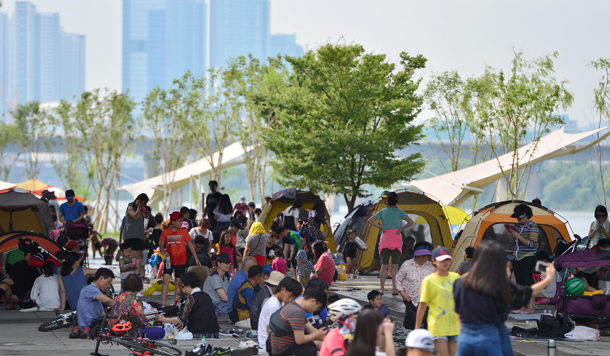 Residents of Seoul escape an extended heat wave across the country by finding some relief in Yeouido Hangang Park on Monday. The daytime temperature in Seoul hit 31 degrees Celsius (87.8 degrees Fahrenheit) on Monday. [NEWSIS]

Korea’s sweltering heat is set to continue until early August at the least, according to the state weather forecaster.

The Korea Meteorological Administration (KMA) issued heat wave warnings Monday across most of the country, including Seoul, Gyeonggi, Ulsan, Busan, Daegu, North and South Gyeongsang, Jeolla and Chungcheong, as well as Jeju Island.

“The heat wave will likely continue through this week and into early August,” said Han Sang-eun, a KMA official. “While the monsoon rains will likely descend from the North into South Korea on Wednesday and Thursday, this is expected to be the last monsoon shower of the year.”

The official said early August will see some temperatures above 30 degrees Celsius.

Korea is not alone in enduring an extended heat wave this summer.

The National Oceanic and Atmospheric Administration (NOAA) predicted that a heat wave in the central United States, with some areas reaching 115 degrees Fahrenheit on Sunday, will continue through this week. The weather and climate agency of the U.S. Department of Commerce said nearly 124 million people in 26 states were issued excessive heat wave warnings, excessive heat watches or heat advisories last Friday.

An excessive heat wave warning is issued when the maximum heat index temperature is higher than 105 degrees Fahrenheit during the day for at least two days.

The rest of Asia, as well as the Middle East and Europe, are issuing alerts and taking measures to cope with the stifling heat.

Heat wave alerts were issued in southern and western regions of China on Sunday, with some areas’ temperatures rising higher than 40 degrees Celsius.

The temperature in Baghdad hit 120 degrees Fahrenheit last Wednesday, reportedly the highest in the world that day. Iraqis working in the city were allowed to take off work that day and the next due to the harsh conditions.

And according to the BBC last Tuesday, some rail companies in the U.K. announced new speed restrictions during the hot weather after a rail buckled in North Yorkshire under the heat.

Climate experts point to global warming as the cause of the excessive heat throughout the Earth. According to NOAA, the 17 warmest years on record all took place in the last 18 years.