We must determine our destiny

We must determine our destiny 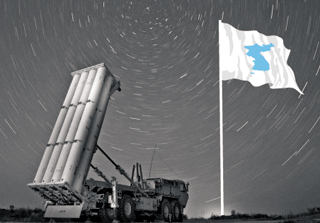 But authorities seem to claim the issue is no subject for the people to comprehend, judge, and therefore argue against. The government must have forgotten that sovereignty lies with the people and that its power is bestowed by the people.

Taking into account what defense specialists and ministers say, there is no clear reason why the missile battery needs to be deployed in South Korea. Half of the South Korean population lives around the capital on which 60 percent of the gross domestic product and nearly 70 percent of the capital is concentrated. Scud missiles from the North can hit the area within minutes.

Because the Seoul metropolitan area will be outside the range of the Thaad interception system when it is installed in Seongju, North Gyeongsang, the government plans to deploy additional short-range Patriot missile batteries around the capital. But here is a question:

Why not deploy more Patriot missiles in Seongju instead of the Thaad system that stokes diplomatic tensions with China and Russia?

The government has made the country’s future more unstable with its decision. It is hard to find strategic thinkers for the county’s future. Analysts say that the Korean economy has not yet reached a point as grave as the IMF bailouts in 1990s. Yet there are obvious signs of wealth polarization, waning productivity and vitality from our rapidly aging society and undermined democracy and other public values. Therefore, the country imperatively needs a breakthrough.

There is a way for symbiotic growth between the two Koreas if the visible and invisible assets of the South and the human and natural resources of the North are combined in the framework of economic cooperation. The economy could recover a benign cycle through enhanced productivity and competitiveness, market expansion, reduced defense costs and eased disparities. Cooperation is essential for peace on the Korean peninsula and around the region.

But the presence of Thaad could jeopardize a peaceful coexistence. The economy would suffer a major blow if China launches an economic retaliation. The reemergence of ideological tensions between a Seoul-Washington-Tokyo alliance and a Pyongyang-Beijing-Moscow alliance could fixate a bottleneck in the economy. The economy cannot expand with its northern path blocked. The lack of farsighted strategic thinking in the administration is regrettable.

We also have to question if the government has a wise sense of balance and sovereignty. Bringing in the U.S. missile system would tilt Seoul more toward Washington. We now have to worry about what could be at risk without knowing what could be gained.

The cruel nature of geopolitics can prey upon a proud country without any real strength. Smaller yet wiser countries find strategic equilibrium among global powers for practical gains. They pursue balancing acts with various other powers without impairing the traditional ties for multivector politics.

We could be making the same mistake of yielding our land as the stage for a war between China and Japan in the 19th century. We should know better than risk a tragic consequence by losing sovereignty over our fate.

The Park Geun-hye administration has undermined democratic principles with its unilateral decision. Democracy is defined by the procedures. The government has not even bothered to draw a consensus for its plans let alone discuss it.

It claims that any opposition is an attempt to divide the nation, making the people fools by feeding them misleading information on the location for the battery deployment. It has outright ignored the people throughout the entire process. If deploying Thaad is not just an arms issue, but a problem involving the people’s safety and the economy, the choice should have been made by the people — not the leaders of Seoul and Washington.

The administration has repeatedly picked fights with the people under the name of national interests. But for whom does the nation exist?
The government should ponder that.