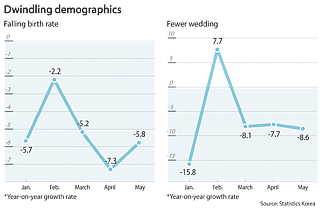 Fewer Koreans are getting married and having babies as future economic conditions remain uncertain and as the number of Koreans at the optimal age to marry falls.

A total of 34,400 babies were born in May, down 5.8 percent compared to the previous year. It was an all-time low for May, according to Statistics Korea on Tuesday.

The year-on-year growth rate contracted for the sixth straight month, starting in December.

The number of people getting married, with its obvious effect on the birthrate, dropped 8.9 percent year-on-year. There were 25,500 weddings in May, the third consecutive monthly drop.

“The number of marriages continued to fall this year compared to the previous year, and it is pulling down the fertility rate,” a Statistics Korea official said Tuesday. “Additionally, there are just fewer Koreans getting married in general.”

Statistics Korea pointed out that the number of people at the optimal age to marry, between 25 and 34, declined from the past.

As of May, there were 3.49 million Korean males in that age range, 2.5 percent lower than 3.58 million in the previous year. The figure for females dropped 2.9 percent from 3.36 million to 3.26 million in the same period.

The number of people getting divorced, on the other hand, rose 10.8 percent to 9,200 cases.

The number of babies born in 11 cities and provinces, including Seoul, Busan and Daegu, dropped, although the number increased in two areas: the southern island of Jeju and Sejong City, where thousands of civil servants are being transferred.

In terms of weddings, Sejong and Jeju Island recorded increases in May compared to the previous year. But the figure fell in seven regions, including Seoul, Busan and Daegu.

Divorce cases rose in nine regions, including Seoul, Busan and Incheon, and Daegu was the only city that saw its figure drop in May. This is the first time since February that the year-on-year growth rate rose.

Another report released by Statistics Korea earlier this year said that the marriage rate for 2015 fell to the lowest rate since 1970, when the government started compiling data in its current form. Only about 5.9 people out of every 1,000 got married, a sharp drop from 9.2 in 1970.

Furthermore, the demographics of marriage continued to deteriorate in 2015 due to the uncertain economic situation. More young people are having trouble finding jobs and more women have decided to pursue careers.

The average age of a Korean bride last year was the oldest ever at 30 and the number of women marrying in their 30s doubled compared to 10 years ago.