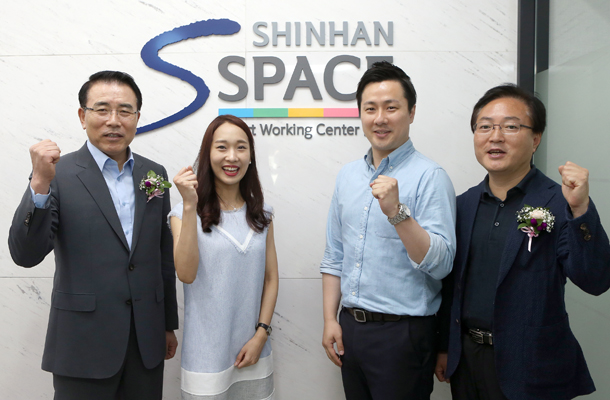 Shinhan Bank will adopt a set of flexible work arrangements that include allowing remote work, a pioneering move that could ease a rigid corporate culture prevalent in the banking sector.

The bank will allow some employees to work from home and establish smart centers in Seoul and Gyeonggi where employees can work if their tasks don’t require a corporate internal network.

The bank has opened centers in Gangnam District in southern Seoul, near Seoul Station in central Seoul and in Jukjeon-dong,Gyeonggi.
The bank said workers in the data analysis, design and ICT support divisions will be entitled to use the centers since their work can be performed remotely without a bank network.

The Gangnam center has 37 seats, a teleconference room and rest areas. No dress code is required when employees work at the alternate sites.

Shinhan will also allow employees to vary their start and finish times around predetermined core hours.

The primary beneficiaries will be parents who want to delay start times for child care and staff frequently working with colleagues abroad, the bank said. Staffers who work at Shinhan branches are eligible for flex time. The move will likely prompt other banks to follow the suit. Major conglomerates including Samsung and CJ have embraced flexible work initiatives and have moved to expand them. Companies in the finance sector are slow to adopt flexible arrangements, in part because of their relatively conservative corporate cultures.

Shinhan said CEO Cho Yong-byoung spearheaded the new policy with workers’ input. “The smart work policy will help establish efficient corporate culture beyond the constrains of time and space,” Cho said at an opening ceremony of the Gangnam center.

“I hope that the change in the way workers work would contribute to the happiness of both workers and clients.”