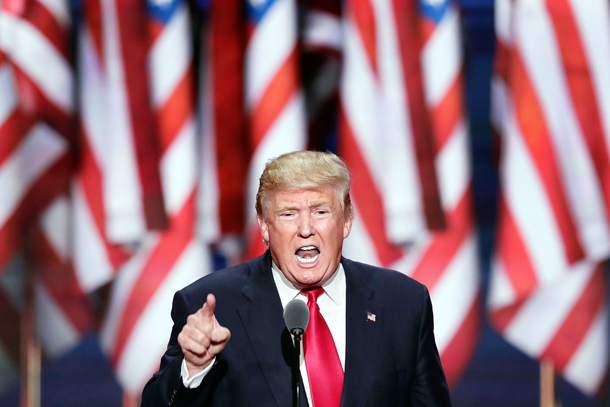 We had been naïve to hope that once Donald Trump became the official Republican presidential candidate, the biased perception about the Korea-U.S. free trade agreement would be corrected. In his acceptance speech, Trump defined the Korea-U.S. FTA as a “job-killing” deal. Since the trade pact, the U.S. service trade surplus increased from $6.9 billion in 2011 to $9.4 billion in 2015, but the statistical fact was not reflected.

Trump also conveniently ignores the U.S. International Trade Commission (ITC)’s analysis that the trade deal contributed to reducing the trade deficit of goods by $15.7 billion. He turned a blind eye to the benefits of free trade and blamed the fall of the U.S. manufacturing sector on the FTA. He has attacked free trade, something the Republican Party believed in, and instead hoisted a banner of trade protectionism.

The mainstream media and trade experts criticize Trump’s protectionist view as outdated and backward. Unfortunately, in the scene of trade, the trade barrier based on American Jobs First is going up high.

The recent dumping decision on Korean steel goods by the United States is shocking. The U.S. Department of Commerce imposed on POSCO a 58.4 percent tariff on cold-rolled steel sheets. The ITC imposed a 47.8 percent tariff on non-corrosive steel products. It is an unexpectedly high duty for industry standards. Predictions on the dumping decision on hot-rolled steel sheets, which is scheduled to come in early August, is also not optimistic.

In addition to the high anti-dumping levies, there is another unusual sign. A trade-related source in Washington D.C. said that the Korean government made efforts to prevent the dumping decision, but they did not work. Hyundai Steel’s situation is extraordinary. Most of the exported goods are used at Hyundai Motor’s plant in Alabama and Kia Motors’ plant in Georgia. The two plants have greatly contributed to job creation in the South. While local politicians from Georgia and Alabama joined the efforts to stop the tariff, it was not enough. With the presidential election approaching, the U.S. government is pressured by the steel labor union and changed its mind.

A trade expert said that in his 20 year career, he’s never seen such a strong protectionist tendency as it is now.

Tariff barriers are fatal to exporters. In 2014, our oil country tubular goods (OCTG) industry was devastated by the U.S. levying a 9.89 to 15.75 percent anti-dumping tariff. Ajube Steel in Pohang, which once enjoyed a shale gas boom, went bankrupt, and 400 employees lost jobs. Now, the plating, cold-rolled and hot-rolled steel sheet lines and employees are in jeopardy.

What’s more regrettable is that the protectionist tendency is likely to intensify, and there are few reasons to weaken. Both the Republican and Democratic Parties openly advocate reinforced trade protectionism. The champions of free trades in both camps are losing influence. The unimaginable, devastating scenario of the United States turning from the guardian of free trade to the tyrant of trade protectionism is approaching.