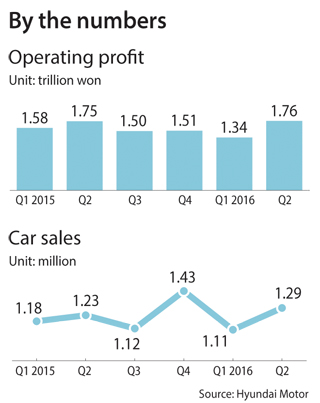 Hyundai Motor’s operating profit in the first six months of the year fell 7 percent from a year earlier to 3.1 trillion won ($2.7 billion) as demand from emerging markets and export volume from Korean factories shrank.

Revenue in the first half, though, picked up 7.5 percent year on year, marking 47.3 trillion won largely thanks to expanded sales of sports utility vehicles and premium models such as the Hyundai Genesis.

Global sales also fell 0.9 percent year on year during the January-to-June period to 2.39 million. Outside of Korea, the top automaker sold 2 million cars, down 1.8 percent from a year ago. Among them, those sold in Korea increased 4.4 percent to 350,006 units in the first half.

“Reduced demand from emerging markets slowed down exports of domestically made vehicles largely contributing to a shrunken number of cars sold in the first half of 2016,” the carmaker said in a statement.

The sluggish global economy, especially in emerging markets such as Russia and Brazil, both of which are in a depression, also dealt a blow to Hyundai. The automaker runs a factory in St. Petersburg, Russia, which can churn out 200,000 cars a year, and another in Sao Paulo, Brazil, where 180,000 vehicles can be produced.

With dented global economic prospect due to Brexit, Hyundai Motor was rather pessimistic about the remaining half of this year.

However, it did make a surprise announcement that it will move up the release date of its flagship luxury model Grandeur, as part of its back-up plan.

“The latter half of this year is expected to show a downfall in demands for cars because of the terminated tax cut period for individual consumption,” said Koo Za-yong, vice president of Hyundai Motor.

“We are going to minimize its impact by stepping up overseas marketing of the high-end Genesis G80, expanding an eco-friendly car lineup and moving up the date of Grandeur’s launch,” Koo said. The new Grandeur was initially scheduled to launch in November.

Also, riding on the popularity of sports-utility vehicles in the global automotive market, a Hyundai Motor spokesperson said it will expand the supply of its SUV models. The launch of Hyundai’s standalone luxury brand Genesis in overseas markets, which will kick-start in the United States later this year, will also compensate for the carmaker’s quarterly losses.

“We increased the production size of Santa Fe [Hyundai’s flagship SUV] in America’s Alabama factory to 50,000 units a year. Launching G80 and G90 in the latter half of this year in the U.S. will also enhance brand awareness,” Koo said.

Hyundai Motor announced it will pay out an interim dividend of 1,000 won per share to shareholders.