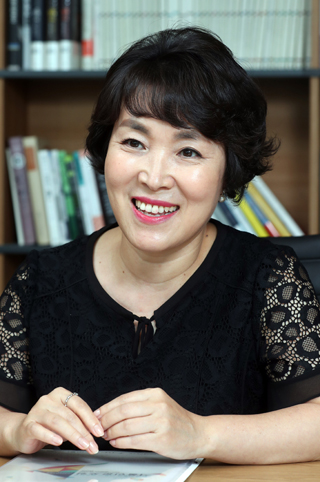 Public interest in the study of humanities has been on the rise in the aftermath of the country’s rush toward economic prosperity and development over the past half a century. While South Korea has pulled off one of the most successful stories of economic growth, many are expressing exhaustion and a need to relax from excessive competition and tight work: the central characteristic of Korean society that is attributed to its rapid success.

Under such circumstances, an increasing number of people are paying attention to the subject of humanities seeking answers as to how to lead a healthy and happy life.

Bae Yang-sook(Grace Bae), a financial planner with the title of honorary business manager of the Samsung Life Insurance Co, has been at the forefront of this movement.

It was in 2011 when Bae began inviting experts in humanities to open lectures every Wednesday for business leaders in a course titled “Forest of Humanities on Wednesday Forum.” Then last year, she hosted the first Seoul Humanities Forum with a budget of 400 million won ($351,865), all of which she personally paid.

As chairwoman of the Seoul Humanities Forum, a non-profit organization founded by Bae, she will host the second Seoul Humanities Forum on Sept. 28 at Shilla Hotel, inviting lecturers including Prof. Chang Ha-sok of history and philosophy of science at the University of Cambridge and Gene Black, president of UCLA.

Below is a modified interview with Bae.

Q. How do you define the subject of humanities?

A. A boy with brilliant brain power can end up being a monster if he grows up without any regard for the study of humanities. If one has knowledge of liberal arts, that person has a sense of pride in oneself. Many societal problems arise due to the lack of such sense of pride in oneself. To have a mindset of humanities requires time and yet it is something that someone must do regardless of the time it takes. That’s why I launched the movement for humanities and intend to continue my work for years to come.

What made you launch your campaign?

It came from my curiosity for many things around the world and my desire to share answers to my questions with others. In December 2011, I attended a lecture by Chang Ha-sok (of the University of Cambridge) on the topic titled “Is H20 Water?”

Before the forum, I heard the old line about how science is a boring subject and students merely study it to go to college. But from Chang’s lecture, I realized this wasn’t the case. I asked Chang to come to Korea and hold lectures for Koreans. He came to Korea in late 2012 and started 12 lectures for the education broadcaster EBS on the theme “Science meets with Philosophy.”

Another trigger was my visit to Davos in January 2012. After I saw how a small town in southern Switzerland had become a go-to place for world business leaders, I began to harbor dreams about turning Seoul into the equivalent of the “Davos of Humanities.” A few years passed and I found myself organizing the Seoul Humanities Forum on Jan. 13 in 2015. This year’s forum will be the second.

What was your impression of great thinkers of the time when you met them to request their participation in your forum?

Most of them handle their professional and personal matters themselves without personal assistants. And they are very humble and frugal. They made me realize what really matters most is what we have deep in our heart, not how we look to others. To be frank, Korean society overtly focuses on outer appearance as it has gone through compressed economic growth over a very short time.
They also complimented me for hosting such a forum on humanities with my own money and without an agenda for profit.

What will this year’s forum consist of?

There will be three theme sections: philosophy, education and history. To have a more thorough discussion, I allocated more time for panel discussions for the upcoming forum than the forum last year.

The agenda of this year’s forum is “Humanism and Science.” There is growing uncertainty and anxiety over the advent of the fourth industrialization accelerated by artificial intelligence (AI).

I believe the progress of science is not tantamount to the advancement of human happiness. To better cope with societal problems, the weakening of moral standards and other man-made disasters, we need to reflect on humanism.

The education broadcaster EBS made a special program about our forum. The Korea Advanced Institute of Science and Technology made an official request that we provide our content for its educational curriculum for gifted children, to which I of course said yes.

I began my non-profit campaign for humanities hoping it would help businesses and social leaders make better decisions. Now it has led me to give lectures before students at many universities from Kyunghee and Yonsei to Inha universities.

What do you mean by helping businesses and social leaders make better decisions?

To help them reach decisions that will keep their companies running. CEOs make very hard decisions as part of their everyday lives. With one stroke, a company could not only shrink in profits but also go under.

I have seen many cases in which a firm with 1 trillion won in revenue posted 500 billion won in losses in only three years and had no other choice but to cut its workforce by firing 600 employees, who are breadwinners for their families.

Those CEOs who have attended my weekly Forest of Humanities on Wednesday Forum (over the past six years) are numbering in the hundreds. My proudest and happiest moment comes when they tell me that they have hired more for their companies.

What do you focus on in your speech for college students?

I don’t teach them about academic theories. I talk about my own life story. No one has a choice over their environment or upbringing and it can be very depressing during one’s adolescent years. I always tried to look on the bright side. Every decision I made in those years made me who I am today.

When I get an opportunity, I ask myself whether doing that job would hurt my dignity as a human being. I have strong self-esteem and that has prevented me from doing things that might undermine it.

I have many episodes to tell young students. … I came from a very humble background. My father went bankrupt when I was a freshman in high school. I think students empathize with my story of overcoming hardship and firmly going my own way.

What makes you campaign for the study of humanities?

I always like to work with others rather than work on my own in my pursuit of what can be called “good energy.” When I work in collaboration, I feel the spread of such good energy.

When I decide on one thing and make up my mind to carry it out, I do it without looking back. I simply ask myself whether I must do it and whether it is something I really want to do and if it will have a positive impact on the people around me.

If the answer is yes, I go ahead. Even if there are plans in my head, they are useless unless I turn them into action. In my case, I would carry out three out of five good ideas in my head after an examination process.