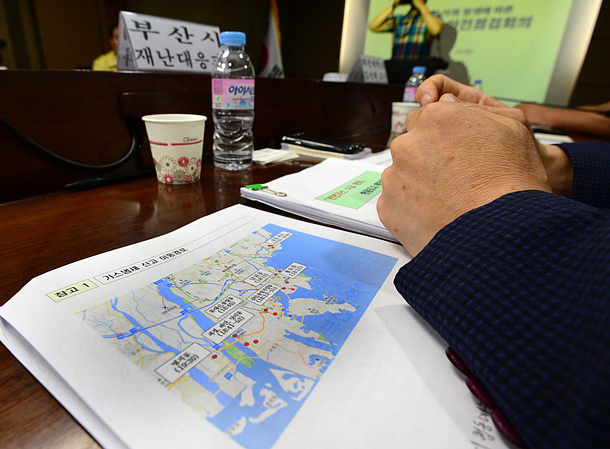 Government officials study a map of Busan and Ulsan together in a meeting on Tuesday at the Central Government Complex in Sejong while discussing investigation plans to find the cause of the mysterious odor detected by more than 200 people in the two cities last week. [NEWSIS]

After reports of a mysterious gas-like smell in Busan and Ulsan, the Ministry of Public Safety and Security hosted a meeting on Tuesday to set up a national investigation to pinpoint the cause of the odor.

“In order to calm public anxiety in Busan and Ulsan, a public and private investigation will search all areas and industrial complexes in the region dealing with chemicals and gas,” said Kim Hee-kyeum, head of the Disaster Management Office of the Ministry of Public Safety and Security.

The ministry, national police, Korea Gas Safety Corporation and the Busan and Ulsan governments agreed to cooperate with the state-led investigation scheduled for a week starting today.

The first gas smell reports were made in Busan on Thursday, in Haeundae and Nam districts. Within two hours, the city authorities received more than 200 reports. On Saturday, reports of a gas-like smell were made to the Ulsan fire department.

Authorities dispatched firefighters, police and gas safety inspectors to Busan on Thursday and Ulsan on Saturday, checking chemical plants, garbage incineration and sewage disposal centers, as well as gas pipes. They measured gas density in the air in the areas but came up empty-handed.

The lack of a clear cause for the gas odor has left many residents making wild guesses, speculating that it could indicate a coming earthquake or perhaps that there are problems with the nuclear power plants at Gori in Busan.

Some of the wildest guesses involve the presence of an anthrax bacterium test by U.S. forces or a missile terror attack by North Korea.

On Saturday a social media user posted online a video of colonies of ants marching on Gwangalli Beach in Busan. The footage quickly went viral and some people linked the ants’ behavior to the gas odor, saying perhaps there was a mass gas leakage somewhere due to supposed plate movements, which could soon lead to an earthquake.

When a 1.7-meter (5.6-foot) long cutlassfish, known to live in deep seas, was caught in shallow waters off a beach in Geoje, South Gyeongsang, on Saturday, more people began to discuss the possibility of an impending earthquake.

But geology and biology experts have called these wild guesses scientifically unfounded.

“If there is to be an earthquake, you will see ants moving toward mountains,” said Park Hyeon-cheol, professor of life sciences at Pusan National University, “not toward the beach where the salt may kill them. The ants were probably hunting for fruit scraps and leftover food on the beach.”

Sohn Jung-wan, manager of the Gwangalli Beach, said the ants’ march is an annual event.

“They come around this time after the monsoon season to mate,” he said, “following the lights of the Gwangan Bridge.”

“The earthquake hysteria took hold of many people probably because Ulsan had earlier this month experienced a 5.0-degree earthquake,” said Yoon Sang-woo, a sociology professor at Dong-A University in Busan. “But there appears to be a general public distrust in the government, especially after recent reports on corruption among public officials.”