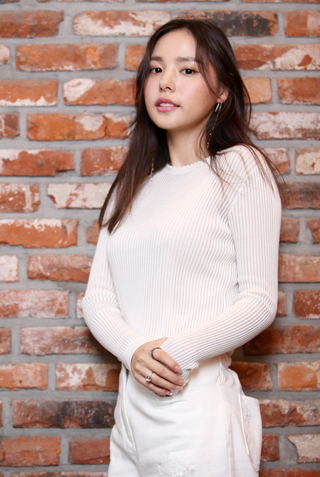 Until recently, Min Hyo-rin’s singing career seemed like it began and ended at the same time.

She debuted in 2007 on the popular KBS2 program “Music Bank,” where she nervously sang a sappy track called “Stars.” Min didn’t impress with her voice, but people took note of her doll-like image, and she went on to have a successful career as an actress in both films and dramas.

However, she finally got the chance to realize her singing dreams through the recent hit reality show “Unnies’ Slam Dunk.”

The program follows six female celebrities as they help each other pursue something they’ve never been able to achieve.

Their first single, “Shut Up” was written by Park Jin-young, otherwise known as J. Y. Park, who is also the CEO of mega-label JYP Entertainment, which represents Min.

Unnies performed the song on “Music Bank,” the same program where Min had flopped before, on July 1.

This time, however, the performance was huge success, and when the song was released on July 22, it topped major music charts.

“[The performance] felt really different from 2007,” she told Ilgan Sports, a Korea JoongAng Daily affiliate. “When I was on stage, everything felt like a dream.”

Min, 30, also shared her further ambitions as an actress.

“I think I played the ‘pretty girl’ enough over the past ten years,” she said. “I now want a role that is like the real me - talkative, cheerful and some times even silly.”

She also talked about her highly publicized relationship with Taeyang, a member of K-pop boy band Big Bang. “We date like any other couples do. Mostly we like to go out and eat delicious stuff. That’s a big part of our dates.”


Q. Unnies performed on “Music Bank.” What was that like?

A. I feel relieved. I was so nervous every day before the performance.

It must have been nerve-wracking, particularly as the performance was broadcast live.

Yes. We wanted it to be recorded beforehand, but [J.Y.] Park suggested that we perform it live.

How do you evaluate your performance?

Yes. It was nine years ago. Since I built my career as an actress, I never thought I’d ever perform on Music Bank again.

Doesn’t it feel bad that Unnies are not here to stay?

Yes, but I also think that we should call it a day. Now that I realized my dream, the upcoming episodes should be about realizing the dream of another member. But Unnies will perform now and then for certain festivals and events.

What’s next for you as an actress?

Until now, I often played characters that are so not like my real self. Of course as an actress, you must become another person. But I did feel some sort of a dilemma. I now wanted to do something that is Min Hyo-rin-like. Often I had to express my character through my attitude. But I now want a role that’s talkative and cheerful.

What did Taeyang say about Unnies?

He really liked it and was extremely happy for me. I did what I always dreamed of and people are reacting positively. So he must have felt good, too.

I had such a good time with “Unnies’ Slam Dunk” but I also want to act. But I got so much from [the show], so I will continue to do what I can for it as well.