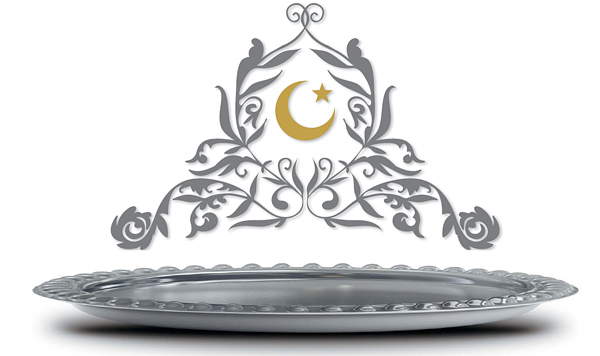 Early this year, a man wearing a blood-spattered sheep mask stood before a crowd of onlookers in front of the Korean government complex in Gwanghwamun, central Seoul.

Suddenly, another man appeared next to him holding a large knife. He forced the sheep-masked man to kneel, placing the blade on his throat as the actor shivered in fear.

It was a performance staged by a local animal rights activist group, Coexistence of Animal Rights on Earth (CARE), to protest the government’s plan to establish halal slaughterhouses.

Halal means “permissible” in Arabic, and it refers to food that is allowed under Islamic law as stated in the Qur’an. In the context of meat, it refers to a specific way of slaughtering animals that has become controversial around the world. While proponents argue it’s actually more humane than conventional methods, others say it’s barbaric.

In March 2015, President Park Geun-hye returned from a trip to the United Arab Emirates with a memorandum of understanding to foster businesses in new markets, including halal food. The Ministry of Agriculture, Food and Rural Affairs quickly began working with various state-run agencies to capitalize on the Islamic way of eating.

Three months later, the government announced its grand plan to foster the halal industry. It included establishing halal slaughterhouses to produce halal-certified meat for both Korean consumers and exports; giving visas to Muslim butchers willing to move to Korea to work at the slaughterhouses; and creating a large halal complex inside the Korea National Food Cluster, or Foodpolis, run by the government in Iksan, North Jeolla.

There is certainly money to be made, particularly as the number of Muslims around the world is rising rapidly.

There were 1.7 billion Muslims worldwide as of 2014, accounting for 24 percent of the global population, and that number is increasing rapidly, according to a report from Thomson Reuters.

But not everyone in Korea is welcoming the embrace of the halal industry - particularly animal rights groups like CARE, who say the method of slaughter is cruel.

In conventional slaughterhouses, animals are typically stunned or shocked to ensure they’re unconscious before being killed. But the halal method of slaughter, called Zabihah, requires an animal to be alive while a Muslim butcher swiftly slits its throat with a sharp blade. The butcher must say a prayer to Allah or at least invoke his name to bless the animal and give thanks for the food. He or she must also take care not to cut the animal’s spinal cord, as the head must stay on the body until all the blood has been drained. Groups like CARE say the method is tantamount to animal abuse.

“The halal method goes against Korea’s Animal Protection Act and it won’t make sense if the Korean government continues to say it’ll push forward with establishing the halal slaughterhouses in Korea,” said Park So-yeon, the director of CARE.

Current laws on the slaughter of animals mandate that suffering should be minimized by rendering them unconscious beforehand, and they also say animals should not be subject to unnecessary pain, fear or stress before being killed.

“We, as animal rights activists, believe both conventional and halal slaughtering constitute animal cruelty,” said Park. “But the halal method is certainly more violent and cruel as it requires the animals to stay conscious while being killed.

“Imagine: the animals get hung upside down from the ceiling of a bloodstained slaughterhouse, then they are approached by men holding sharp knives. They have to wait until the butchers say their prayers… Because the animals are conscious, they watch all that in fear,” she added.

But according to Kim Jin-woo, the head of Halal Korea who also headed Halal Expo Korea last year, it’s not clear that traditional methods are so much more ethical.

“I admit that it is a horrendous scene to watch blood flowing from the throat of an animal while its head is still on the body. It looks violent and cruel,” said Kim. “But just because meat is now bought neatly and hygienically packaged on supermarket shelves does not mean an animal didn’t have to die.

“Is it less painful to shoot a bolt into a sheep’s brain or to ring a chicken’s neck than to slit its throat? To watch the procedure does not objectively tell us what the animal feels,” Kim added, arguing that if people watched video clips of conventional slaughterhouses, they might also feel the animals are being abused.

Meanwhile, the Ministry of Agriculture, Food and Rural Affairs said that animal rights activists’ opposition to Korea’s halal slaughterhouses is based on a false premise, because the animals killed there will also be stunned.

“The [slaughterhouses] that will be established in Korea will adopt a regulation to stun the animals before killing them, as some Muslim countries like Malaysia and Indonesia have done, because unconscious animals should still be considered alive,” an official from the ministry explained.

Park from CARE said she hadn’t heard this until the reporter brought it up, even though her group has been sending the ministry numerous requests for information about the status of the halal slaughterhouses and the government’s stance on existing animal protection laws if the halal method is adopted. Still, she’s not convinced by the claims.

“We think they are going to make an exception to current laws even though they say they are going to adopt a method for stunning at the moment,” Park said. “There are some overseas cases where they’ve made an exception in the law to allow halal slaughtering and I think Korea will do the same because you can’t neglect the protests from Muslims who will be the consumers.” In fact, some Muslims in Korea have expressed discomfort about how the Korean government is approaching their religious practices only as a means to profit.

“Korea is already compromising on some Islamic laws and beliefs,” said a Muslim man in his 50s from Pakistan living in Seoul, who requested anonymity. “Many of my friends - and myself as well - believe that stunning animals before slaughter is not compliant with our religious teachings. It seems like Korea is regarding halal as a money-making business rather than showing some consideration towards our beliefs.” 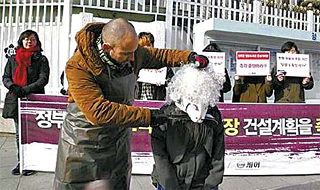 Coexistence of Animal Rights on Earth (CARE), an animal rights activist group, demonstrates how animals get slaughtered the halal way in a January protest in Gwanghwamun, central Seoul, against the government’s plan to establish halal slaughterhouses in Korea. [CARE]

Others, including a Korean Muslim man surnamed Kim, 77, who owns a supermarket selling halal-certified products in Itaewon, central Seoul, question whether halal abattoirs here will even follow the less controversial requirements.

“There are numerous steps to take, prayers to be said and things to remember when slaughtering animals for meat the halal way. This of course takes more time than the conventional method, [and] time equals money,” said Kim. “Therefore, I doubt that Islamic laws will be obeyed in a country that first approached halal as a money-maker and also has such a deep-rooted bbali bbali [quickly quickly] culture.” Park from CARE also argued that around the world, there have been numerous examples of halal slaughterhouses mistreating their animals, including beating the creatures or killing them in more merciless ways.

“The halal way of slaughter is supposed to be sacred,” she said. “Animals should not see other animals getting slaughtered. If they do, they can’t be certified as halal. They should not be beaten or mistreated, but in many slaughterhouses, their own rules are being neglected.”

The government had initially planned to establish halal slaughterhouses by the end of this year. In order to motivate conventional butchers to switch to halal methods, the Agriculture Ministry said it would pay for the remodeling and upgrading of their slaughterhouses, earmarking about 4 billion won to do so.

But following fierce opposition from the animal rights activists and some conservative Christian groups, who oppose the support for the halal industry on the grounds it’ll bring more Muslims to Korea, the plans have been stuck in limbo.

However, the ministry has said that “since there’s still half the year left, it’s too early to say we won’t be able to follow through within 2016.”

The slaughterhouse issue has contributed to a negative perception of halal food as a whole in the country, but industry insiders say meat is only one part of a hugely profitable industry. They say the government should stop obsessing over constructing slaughterhouses and instead focus on getting already popular Korean products, like kimchi and instant noodles, halal certified for sale around the world.

One local company doing this is Ourhome, which got its kimchi and gim (dried seaweed) certified as halal at the end of 2014 by the Korea Muslim Federation, the only organization here that makes the designation. Both products were initially sold only business-to-business, but the company said it has been selling them at Incheon International Airport’s Food Empire areas since April.

“Because kimchi is popular globally as a probiotic food, and since gim is being consumed by many foreigners as a snack, we decided to expand our distribution,” said an official from Ourhome.

In order to earn the halal certification for its kimchi, Ourhome has to follow strict guidelines such as using pesticide-free napa cabbage and other natural ingredients.

Located inside Incheon International Airport, the spot offers a diverse selection of Korean dishes and curries, but according to Ourhome, the most popular items are its many types of gimbap, or rice rolls, with the bulgogi (marinated beef) gimbap using halal beef faring particularly well.

But many of the products Koreans consume everyday already have halal versions. Nongshim, the country’s largest instant noodle producer, obtained halal certification for its popular Shin Ramyun in 2011, long before the government identified halal food as a cash cow. It even built a separate production facility at its plant in Busan, where it also produces a halal-certified yukejang (spicy beef) cup noodle.

Lotte Confectionery also has been producing a halal-certified Chocopie for the Vietnamese market since 2010 through its joint corporation there. Earlier this month, the group said it obtained the certification for some of its Pepero products, the popular chocolate-covered sticks. “It’s a pity that halal is being perceived so negatively in Korea, and that everyone is so distracted by the issue of whether it is violating the rights of an animal or not to slaughter it the halal way,” said Kim from Halal Korea.

“I used to live in Malaysia for about 15 years and while I was there, I visited many exhibitions related to the halal businesses and witnessed tremendous opportunities in the whole halal industry,” he added. “Halal food is, of course, a big business, but at the same time, it’s just one part of the industry. We are starting with food, but quickly have to move on to [things like] halal beauty products and so on. There’s no time to hesitate.”