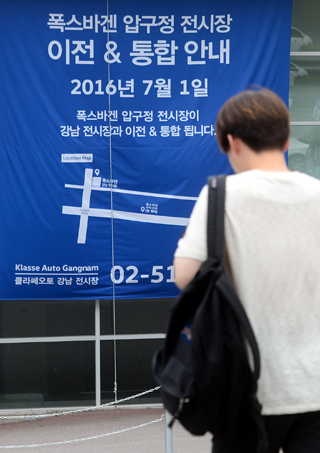 A Volkswagen dealership in Apgujeong, Gangnam, southern Seoul, was closed for the first time in 11 years. The banner indicates that the Apgujeong site merged with its Gangnam branch at the beginning of this month. This week, the German automaker voluntarily stopped Korean sales of 79 models implicated in a gas emission scandal. The company attended a public hearing on the scandal, organized by the Korean Environment Ministry, on Monday. The Korean government will decide on actions against the automaker on Aug. 2. [NEWSIS]