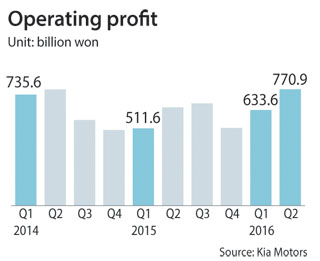 Kia Motors outshined its older and bigger sister Hyundai Motor in the first half of this year.

Kia Motors also posted a three-year highest quarterly operating profit of 770.9 billion won. “With the strong dollar as well as new car effects with our K7 model and strong RV sales, we were able to notch up in revenue,” a Kia Motors spokesperson said.

Revenue from January to June increased 14.7 percent over last year to 27 trillion won.

Although sales volume tumbled from 1.5 million units to 1.4 million this year, the rising popularity of RVs or recreational vehicles, which includes minivans, sports utility vehicles and wagons, played a vital role in lifting Kia. RVs are more expensive than other vehicles.

Globally, the number of RV models sold increased from 34.1 percent to 38.1 of the entire sales volume. The release of new models also contributed to Kia’s results.

Although the global market is projected to remain sluggish, Kia Motors plans to release eco-friendly models and expand its RV line-up.

“We are going to boost our eco-friendly image by releasing hybrid and plug-in hybrid models Niro and Optima in the United States and Europe in the third quarter,” Han Chun-soo, Kia’s chief financial officer, said Wednesday.

In Korea, Kia is planning to release the Morning compact car and a hybrid version of the K7 large sedan.

“The latter half of this year will not be good for Kia Motors, as both domestic and overseas markets will show demand shrinkage,” said Kim Joon-sung, an analyst at Meritz Securities. “Defending the domestic market would be the first and necessary step to continue its favorable sales trend.”