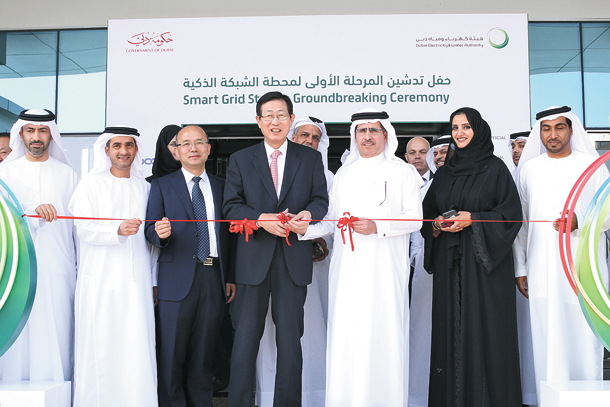 Cho Hwan-Ik, president of Kepco, cuts the tape during a groundbreaking ceremony for its Smart Grid Station project in Dubai on May 24. [KOREA ELECTRIC POWER CORPORATION]

Korea Electric Power Corporation (Kepco) held a groundbreaking ceremony for a project demonstrating how “Smart Grid Stations” can be used to make cities more efficient at the Dubai Electricity & Water Authority (DEWA) Green Garage in Dubai on May 24.

Smart grid is an electric power network that uses information and communications technology (ICT) to intelligently maximize the efficiency of the energy used.

The stations, on the other hand, serve as regional control centers for the grid.

The project makes use of the air of cooperation created during Korea’s state visit to the Middle East in April 2015, which included deals with Dubai.

It’s one of the first steps in turning Dubai into a so-called Smart City, or one in which ICT drives the supply and consumption of electric power.

With a budget of $3 million, the demonstration project will include the construction of a model of a Smart Grid Station in DEWA’s headquarters, which will include solar panels, an energy storing system (ESS) and integrated operating system.

If the project works out successfully, it is expected to create momentum to expand Kepco’s smart grid to cover the entire city.

DEWA is planning to continue the transformation of Dubai into a Smart City based on the smart grid technology through 2021.