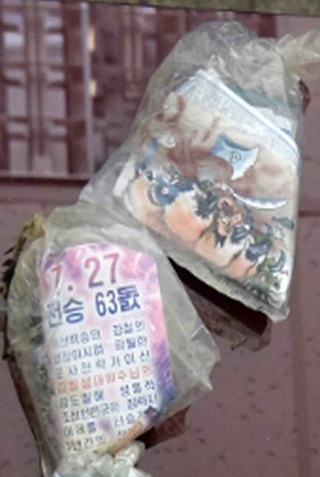 Plastic bags stuffed with propaganda leaflets were floated down the Han River, although Pyongyang hasn’t taken credit for them. [NEWSIS]

South Korea’s military accused Pyongyang of sending dozens of plastic bags stuffed with pro-North Korea leaflets across the border via the Han River, the first case of its kind.

The Joint Chiefs of Staff said Wednesday that the transparent bags were discovered last Friday morning at the mouth of Han River in Gimpo, Gyeonggi, just south of the inter-Korea border.

Measuring 12 centimeters (4.7 inches) by 24 centimeters, the bags held around 20 propaganda leaflets threatening to strike the South with Musudan missiles.

The leaflets used the same grade of paper as those flown over the border via balloons in the past.

Wednesday marked the 63rd anniversary of the signing of the armistice agreement in 1953, which ended the 1950-53 Korean War with a cease-fire.

A leaflet proclaimed Pyongyang had won the war under the orders of “military strategist” Kim Il Sung, the late state founder and grandfather of current ruler Kim Jong-un.

Another leaflet featured a three-panel cartoon showing U.S. President Barack Obama supposedly bruised and covered in ashes after being attacked by an intermediate-range ballistic missile Hwasong-10.

Pyongyang is suspected to have floated the leaflets from a port in Kaesong, waiting until a high tide in the Yellow Sea pumped water down the Han River. If local authorities hadn’t found the flyers, they could have reached Goyang, Gyeonggi, military sources said.

As to why the North hadn’t used balloons, the military said summer winds would have made that impossible.

Authorities warned the public to report any findings of additional plastic bags, saying they could contain toxic substances.

While Pyongyang has yet to acknowledge the leaflets, military sources said the plot was likely masterminded by the North’s General Bureau of Reconnaissance and a branch that oversees the regime’s production and scattering of propaganda leaflets.

Founded in February 2009, the General Bureau of Reconnaissance has tremendous political authority in the North, covering overseas intelligence, espionage operations in the South, and the running of agents.

Teams of North Korean spy agents dispatched to China and Southeast Asia to attack South Korean nationals are reportedly controlled by this bureau.